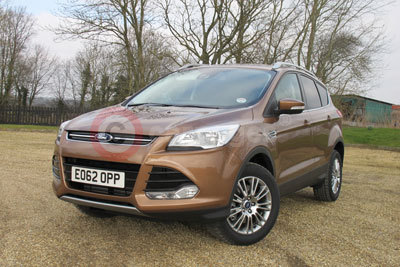 Ford calls its latest Kuga a ‘Smart Utility Vehicle’, the company’s spin on the usual SUV acronym for ‘Sports Utility Vehicle’. It neatly makes the point that the new second generation Kuga is a smarter looking car, spruced up to compete for attention in an increasingly crowded area of the car market, and one that is also growing in popularity. The strength of competition has forced Ford to sweeten its offering: the new Kuga works out at around £1,000 than the equivalent version in the outgoing model.

What has changed? The body has been restyled to bring it up to date with Ford’s latest ‘family’ look, the car is slightly longer with a bigger boot, and it has been given updated engines, suspension, new technology and more equipment.

The Kuga, originally launched in 2008, was a late arrival on the soft-road SUV scene. By the time this first generation Kuga originally appeared, it was already preceded by some strong rivals from other manufacturers. Both Toyota’s RAV-4 and the Honda CR-V were already on their third generation models, and the Nissan QASHQAI was the biggest selling car of this type. In its first five years on the British market, around 45,000 Kugas have been sold. That sounds a lot, but that is about the same as the more keenly priced Nissan QASHQAI sold in just one year in 2012. So Ford has some catching up to do with the updated Kuga, although the company insists that it has sold better than predicted. Where are the cars built? The Kuga is made in Spain, and the RAV-4 in Japan, but both the QASHQAI and CR-V are produced in Britain.

Post-Millennium doomsayers predicted the demise of 4x4s, but their popularity with buyers has confounded that view. There has also been a rising trend in vehicles that have the rugged looks of a 4x4, but are actually two-wheel-drive. In common with other similar vehicles, the Kuga is available as either a 2WD or AWD model. The range includes a 1.6 petrol model with front-wheel-drive, a two-litre diesel with front-wheel-drive, and two power levels of 2.0 diesel with all-wheel-drive. Transmission are six-speed manual or six-speed dual-clutch Powershift auto. There are three levels of trim and specification: Zetec, Titanium and Titanium X. Prices start from £21,895 and the dearest Kuga is £29,795.

The Kuga is a sprightly performer. With a 2.0 TDCi engine, Powershift automatic transmission and all-wheel-drive, the 0-62 acceleration time is around ten and a half seconds and the top speed is over 120 mph, leaving plenty in hand for relaxed motorway cruising. This 1997 cc turbodiesel engine has a power output of 161 bhp at 3,750 rpm, and 251 lb ft of torque at 2,000 to 3,250 rpm. The average fuel economy is 45.6 mpg and CO2 output is 162 g/km. With the same engine and a manual gearbox, the acceleration time drops just below ten seconds, while the fuel average is 47.9 mpg and CO2 is 154 g/km.

The greenest performer in the range is the 2.0 TDCi with manual transmission and front-wheel-drive. It is still a very decent performer, with a 0-62 mph figure of 10.6 seconds and 118 mph top speed, but the combined fuel figure is 53.3 mpg and CO2 output is 139 g/km.

The two-litre diesel engine works particularly well with the Powershift automatic transmission. Shift quality is pretty seamless and change points are nicely judged, so that it works unobtrusively in the background without calling any undue attention to its activity.

This is a 8-year+ news article, from our Ford archive, which dates back to the year 2000.

If in doubt check with your local Ford dealer as car prices and technical data will have changed since 2013.