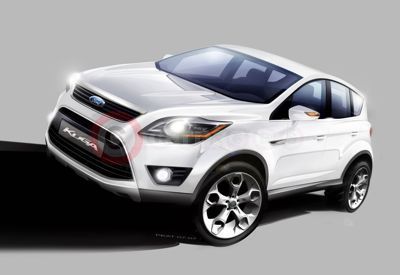 Ford of Europe's model range will have an all-new addition early in 2008 – The Ford Kuga.  A preview model of the production vehicle will be presented to the press and public at the 2007 IAA Frankfurt Motor Show, which opens on the 13th September 2007.

"With the launch of the Ford Kuga, we will keep the promise that we gave at the Paris Motor Show 2006: to develop a stylish new model based on the stunning Ford iosis X concept car in less than two years," said John Fleming, President and CEO, Ford of Europe.

"We recognised that image-conscious customers for this kind of vehicle want a very individual car in which impressive on-road capability blends seamlessly with substantial off-road ability," said Martin Smith, Executive Design Director for Ford of Europe.

"Kuga will stand out from the crowd by offering  the visual excitement of 'kinetic design' and the on-road driving quality that customers of cars like the Ford Focus, the S-MAX and the new Mondeo have come to expect from us," added Smith.

The Ford design team is also releasing its first official styling sketch of the new model.

"Kuga is adventurous and distinctive, and we wanted to highlight this in our first official image," Stefan Lamm, Ford's Chief Designer for Exteriors, commented.  "We believe that there is a role for a more athletic and charismatic vehicle that marks a departure from the norm, in the same way that the award-winning Ford S-MAX carved out new territory for an MPV."

The all-new Ford Kuga will go into production early in 2008 at Ford's Saarlouis plant in Germany.  It will be launched across Europe from Spring 2008.

"I'm really excited that we are adding the Ford Kuga to our growing product range in Europe," said Fleming.  "It represents the continuation of our design-led commitment to add emotion and desirability to our cars and we expect it to bring even more new customers to the blue oval brand as we continue our product-led transformation towards sustained business success."