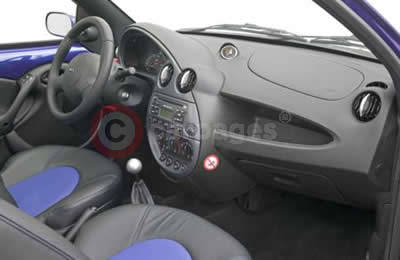 The latest model of Britain's favourite city car, the Ford Ka, debuts at the Amsterdam Motor Show today, with new features set to appeal to the wide spectrum of Ka buyers.

The Ford Ka is Britain's most popular supermini taking 43 per cent of the market. Sales in 2004 reached 46,000 - more than double its closest rival. Already in 2005, Ka's share of the market has grown and since its arrival in 1996, more than half a million Ford Ka models have been sold in Britain.

Ka grows up in 2005 thanks to an entirely new wiring system which brings large car features to the Ford supermini for the first time. The features are standard on all Ka Luxury and Sportka models:

Ka Collection will now be available with a new six-spoke design alloy wheel as a £400 option and Sportka will have tinted rear side windows. The familiar moulded bumpers are available in a choice of new colours, Torque Grey or Steel.

An enhanced dashboard means the addition of a new three-litre glovebox on the passenger side. This is a direct response to feedback from Ka drivers who wanted a traditional glovebox instead of the cylindrical box that came with the original styling.

The range of new standard features and options for Ka buyers are available now.