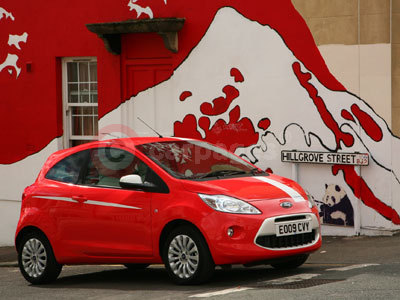 After requests by thousands of viewers, Universal Records, in collaboration with Ford is releasing the exclusive music track composed for its recent Ford Ka European TV campaign.

The track is the first release from "The Tease featuring Megan Wyler" and was created exclusively for the TV launch advert for the all-new Ford Ka in January 2009. The advert prompted an immediate posting on the video-sharing website, YouTube, and thousands of viewers subsequently attempted to identify the music. To date almost 400,000 hits have been registered.

Ford quickly made the decision to record the music as a full length commercial track in association with Universal Records and to release it digitally through iTunes, the on-line media store operated by Apple. The track is now available to download.

Megan Wyler, currently recording her first solo album, is an experienced singer on the New York City club scene. "The track was a fun collaboration for me so it was fantastic to hear there was desire for a full track to be recorded - I'm really pleased its been such a success for all involved."she said.

The original music was composed on Ford's behalf by Soundtree and Ogilvy Advertising, London, with assistance from the Universal Records label.