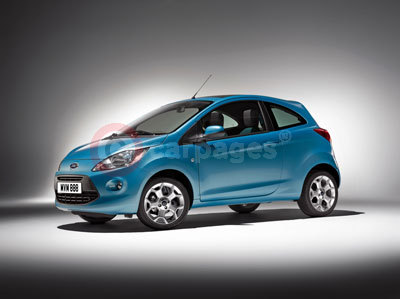 Twelve years after the original Ka was launched to great acclaim, its successor captures the same youthful and cheeky spirit. The new model retains all of the qualities which made the Ka so popular – its compact size, great looks, lively dynamics and fun personality – but presents them in a fresh new package.

Stylish Inside and Out

Ford designers have given the new Ka a fashionable, modern appearance based around the company's 'kinetic design' form language. A number of visual cues provide a connection to the original Ka, but with its distinctive face and chunky proportions the new model has its own unique character.

The interior of the new Ka also has a stylish, dynamic design, combining bold contrasts and expressive colours which reflect the more adventurous tastes of the typical Ford Ka buyer.

Rebirth of a Design Icon

The new model is destined to continue the considerable success of the original Ford Ka, which is widely considered to be an automotive design icon. Launched at the Paris Motor Show in 1996, the Ford Ka was immediately praised for its exciting “New Edge” styling and class-leading driving dynamics.

Throughout its 12-year life the Ford Ka has remained tremendously popular among small-car buyers, inspiring fierce loyalty from its owners. In total, Ka production has exceeded 1.4 million vehicles.

"We are very excited about the launch of the new Ka", said Roelant de Waard, Chairman and Managing Director, Ford of Britain.  "The original has been a huge hit in the UK with a sales record of over 480,000 – 80 per cent of which have been to retail customers, and many of those first-time buyers. I'm confident that the latest design will prove just as big a hit", he added.

Further information on the new Ford Ka range will be released in time for the Paris Motor Show in early October 2008.