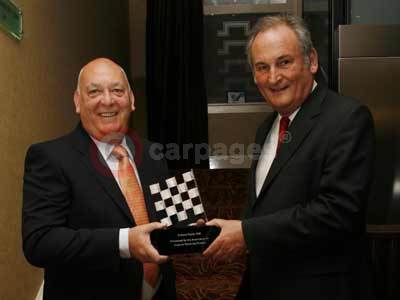 The Association of Scottish Motoring Writers has awarded Richard Noble OBE with the Jim Clark Award, sponsored by Ford.

In 1983, Richard Noble broke the land speed record in Thrust2, with an average speed of 633.468mph and as director of the Thrust SSC programme, achieved the first ever supersonic land speed record at 763.035mph.

Richard Noble is a qualified pilot, and his projects include the ARV Super2 light aircraft, the Atlantic Sprinter Blue Riband contender and the Mach 1.4 Bloodhound SSC project - the latest in the long line of Land Speed Record cars.

John Murdoch, president ASMW, said: "It is a great privilege for the Association of Scottish Motoring Writers to honour one of the world's fastest men on land with an award in memory of one of the fastest men on the circuit. I am delighted Richard has won the 2011 Jim Clark Memorial Award that recognises worthy recipients who contribute their passion and energy to our industry."

After the presentation Richard said: "This is a huge privilege for me and important recognition for the ThrustSSC and BloodhoundSSC teams. Jim Clark was one of my boyhood heroes and as we all know a totally brilliant driver and a great ambassador for Scotland.

"I was born in Edinburgh in 1946 and I follow fellow Scot Sir Malcolm Campbell (1885-1948) who held the World Land speed Record 9 times between 1924 and 1935. We have only taken the World Record three times but have held it for 27 years – the longest ever. With the BloodhoundSSC car under construction we hope to raise the record to 1,000mph taking it multiple times on the way forward from our current record of 763.035mph – so we might get even with Sir Malcolm yet!

"There is an important Scottish feature in all this. The Bloodhound Project is designed to share all data with schools and colleges in order to create a new generation of engineers and scientists. So far we have 4,432 schools on the programme of which 660 are Scottish."

Presented annually, the Jim Clark Award is sponsored by Ford, decided by the Association of Scottish Motoring Writers (ASMW) and is named after Jim Clark who, in a Lotus 49 at the Dutch Grand Prix in 1967, gave Ford its first ever Formula One win with the new Ford-Cosworth V8 Grand Prix engine. Previous winners include motorsport legends Sir Jackie Stewart, David Coulthard, Allan McNish and Colin McRae.