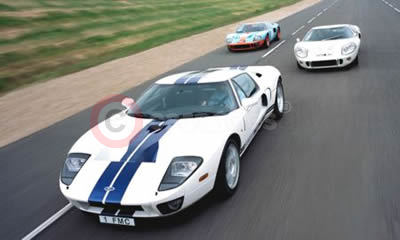 The first fully-homologated production Ford GT supercar to be officially imported by Ford Motor Company into Europe, is to remain in the company's ownership and become part of its Essex-based Ford Heritage Collection of historically significant vehicles.

There it joins two original Ford GT40s, both of which have been owned by Ford since they were built in 1964 and 1969.

"Only 101 Ford GTs are being imported officially by Ford to Europe and, of these, only 28 are destined for UK customers," explained Ford of Britain chairman, Roger Putnam.

"Given Ford's proud and successful motorsport heritage over the past 102 years, it is entirely appropriate that the first of these new supercars joins the Ford Heritage Collection. There it takes its rightful place alongside our original GT40s, plus some other historically important cars, including the Ford Escort in which Hannu Mikkola and Gunnar Palm won the London-Mexico World Cup Rally in 1970," he added.

Built at Ford Motor Company's Wixom plant in Michigan, USA, the 2005 Ford GT owes much of its design concept to those original cars. And with 550bhp on tap from its 5.4 litre supercharged V8 engine, the Ford GT has a top speed of 205mph, making it the fastest standard production car ever built by Ford.

Although some race-tuned GT40s were capable of exceeding that figure, road-going versions would achieve a maximum speed of around 160mph.

Those early cars were never officially named GT40 by Ford. They too were known as Ford GTs until the day someone realised that they stood only 40 inches tall – hence they were nicknamed GT40. And that nickname stuck.

Today's £120,900 Ford GT is a little taller than the original cars but, at 44 inches, is still 12 inches shorter than a current generation Ford Fiesta.

In 1968 a new road-going version of the Ford GT40 cost £7,540 – the equivalent then of five Ford Escorts plus three Cortina estates plus a Corsair 2000. The official Ford advert for the GT40 at that time described boot space as "laughable" and petrol consumption as "wicked"!

When Ford announced in 2003 that it was to make 101 examples of the new Ford GT cars available for sale officially in the European market, that number was not chosen at random. It was the same number of GT40s originally built in the UK by Ford in the 1960s. Within weeks, the company was inundated with enquiries from potential customers. In the UK alone, some 800 people were noted as serious intended purchasers for the new supercar.

A little later this month the first of the batch of 28 UK cars will be delivered to their owners. From the production plant in the USA, officially imported European cars are shipped to Bremerhaven in Germany and from there to a homologation centre established by Ford and engineering partner Roush at the Nürburgring where the changes necessary to meet European legislation are made to the cars. Each car is extensively road and track-appraised by a dedicated team before being delivered.

The new Ford GT joins the significant Ford Heritage Collection which contains around 85 vehicles and items of Ford memorabilia. The oldest car in the collection is a 1910 Model T, built in the USA. The collection also features Trafford Park, Manchester-built Model Ts and several significant pre and post-war Dagenham-built models as well as vehicles produced at Halewood on Merseyside, Langley in Berkshire and Southampton in Hampshire. Milestone vehicles include the oldest-surviving Transit van from 1965 and the very last models produced of the Cortina, Capri, Sierra Cosworth, RS200 and Escort ranges. Plus the first Ford Racing Puma and first Focus RS.

Unusual items of memorabilia include a Merlin V12 aero engine, one of 33,000 built by Ford for the Air Ministry during World War Two at a specially-established factory at Urmston in Manchester. These engines were fitted to a variety of wartime aeroplanes including the Lancaster and Mosquito.

Ford GT Images may not be UK specification cars. Colours and exterior and/or interior elements may differ from actual models.