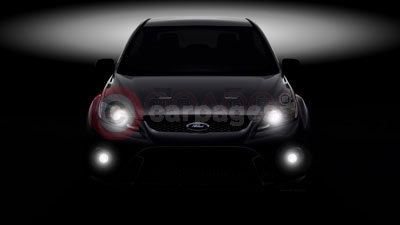 Ford has confirmed its plan to deliver an exciting all-new, high performance Focus RS model for launch in 2009.  A design image released by the company today hints at the direction the new model is taking.

The new Focus RS will be based on the dynamic new Focus ST.  It will be developed by Ford Team RS, a specialist team led by Jost Capito who, as previously announced, is being appointed to the new role as Vehicle Line Director for Ford of Europe Performance Vehicles from January 1, 2008.

"With two consecutive Manufacturers' World Rally Championship titles under our belt, the time is right to create a new Focus RS," said John Fleming, Ford of Europe's President and CEO.  "With the Fiesta and Focus ST models, Jost and his team have proved already that they can deliver exciting and practical performance road cars.  The success of these models, combined with Jost's experience in motorsport and Ford of Europe's positive business results, mean that we now have a credible business case for a no-compromise Focus RS roadcar for more enthusiastic drivers."

The basic concept for a new Focus RS has been under development within Ford Team RS under Capito's leadership for some months already. Now that the programme has been given the 'green light', Capito and his team will be concentrating fully on this programme.

"We have reviewed our technical options and worked closely with the Design team on how the car might look, and I'm very excited by the results," said Jost Capito, "Now with the programme going ahead, the hard work really starts as the small team working on the project takes the car from prototype to production."
Ford of Europe will not reveal any of the technical details of the new Focus RS until closer to launch in 2009. The company plans to show a concept version of the car publicly for the first time in mid-2008.

"We will use the redesigned 2008 Focus ST as the base for a no-compromise RS model that will become the ultimate road-going Focus," Capito added.  "Just as the Focus RS WRC owns the rally circuit, we want the new Focus RS to own the road, so we have the major competitors in our sights as we develop the car's performance, design, handling and braking."

"We're not ready to confirm any of the technical details of the new Focus RS yet - Jost and his team have a lot to do to finalise the exact specification and styling," said Fleming. "But make no mistake, I can assure you that ultimately, the car we plan to launch will be worthy of wearing the coveted Ford RS badge."