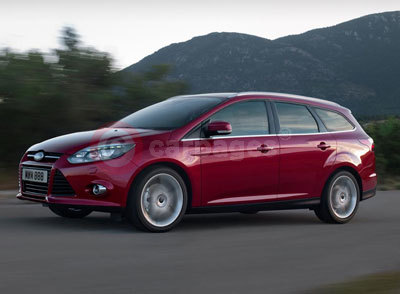 Orders are now been taken for the new Ford Focus Estate which will be hitting UK Ford Dealers forecourts at the end of May 2011.

It should account for 15% of all Ford Focus Sales in the UK and over 30% in Europe.

In addition to the  petrol and diesel engines, the new Ford Focus range also incorporates other features from Ford ECOnetic technologies to help minimise fuel consumption and CO2 emissions. Which means that cars fitted with the 1.6-litre Ford EcoBoost petrol and 1.6-litre TDCi diesel engines are equipped with standard Auto-Start-Stop, meaning CO2 emissions at 109g/km on the diesel model – as they say every little bit helps.

At 2,648mm, the estate shares the same wheelbase as the five-door model, but to accommodate a larger load area, overall length is increased by 198mm to 4,556mm.

With the rear seats in place the estate has a large, regular load compartment, with a volume of 476 litres.  The rear seats split on a 60/40 basis and have a convenient ‘flip and fold’ mechanism to tip the seat cushion forward and create a flat load platform with the seat backs.  In two-seat mode, the maximum load capacity is increased to 1,502 litres.

Impressively the new Ford Focus Estate can be specified with a number of features only recently seen on high end cars such a BMW.

We hope to bring you a review of the new Ford Focus Estate later in the year. Prices and more information are available for your local Ford Dealer.