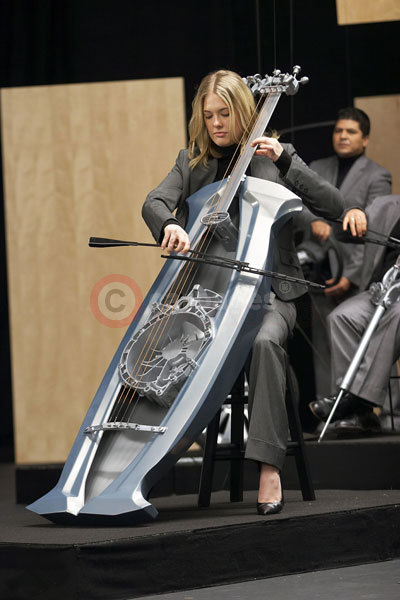 Ford's latest advertising campaign will focus on the music when it's aired in the UK from 4th February 2008.

In a clever feat of musical ingenuity, an orchestra playing instruments created entirely from car parts performs the soundtrack to the new Ford Focus television commercial.

This harmonious masterpiece is the work of two American composers who have taken the concept of car sounds to the extreme. Hollywood film composer Craig Richey and New York sound designer Bill Milbrodt turned 21 parts from the new Ford Focus into musical instruments and arranged them to be played by an orchestra.

Milbrodt’s team took apart a Ford Focus five-door hatchback that had, literally, just come off the production line. “When we got it to the mechanics shop, it had less than a mile on the clock. We took the doors and fenders off, but we had the body shell intact and we later cut out of that the parts we wanted,” said Bill Milbrodt.

By the time the orchestra had been assembled for the photo shoot at Universal Studios in California, Milbrodt’s team had constructed 31 instruments. Each has a name that instantly identified its origins, such as the Transmission Case Cello-Dulcimer, Clutch Guitar, Rear Suspension Spike Fiddle, Fender Bass, Hatchback Kick Drum, Handheld Gear Tambourine and Door Harp.

So what does music played by car parts sound like? Tune onto ITV on 4th February 2008 to find out!