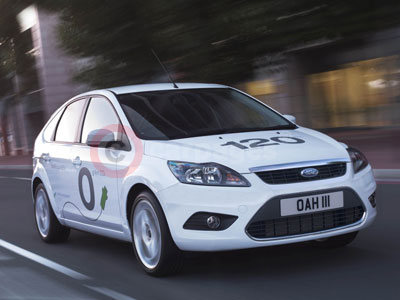 At the 2009 Frankfurt Motor Show, Ford of Europe is revealing the first of a fleet of Battery Electric Vehicle (BEV) prototypes based on the Ford Focus, and specially developed to participate in the UK Government's "Ultra-Low Carbon Vehicles" demonstration initiative next year.

A consortium of Ford, Scottish and Southern Energy and Strathclyde University will use the fleet of 15 prototype Ford Focus BEV vehicles and a charging infrastructure in and around the London Borough of Hillingdon from early 2010.

This new BEV demonstration fleet is being developed partly with public funding from the UK Government's Technology Strategy Board (TSB), which promotes innovative industry-led projects that reduce CO2 while benefitting the country's transport system.

"Electrification is a key element in the effective use of Ford's global resources and talents," John Fleming, Chairman & CEO Ford of Europe said. "The development of this fleet of Focus BEV prototypes is an important step in our goal of delivering more efficient and sustainable mobility solutions that are affordable and practical for our customers. We are looking forward to working with the various project partners on developing a realistic solution and viable market for electric vehicles both in the UK and Europe."

The Ford Focus BEV prototype is based on the current European Ford Focus and will use a new all-electric powertrain, provided by the strategic supplier Magna. This technology is based on that being developed for Ford's new-generation C-sized global vehicle architecture and which will be launched in North America in 2011.

To evaluate whether this technology is suitable for European road and driving conditions, a fleet of 15 European Focus BEV prototypes is being built. These cars will deliver local zero emission mobility without constraining the user needs and providing room for five passengers, a practical boot and other Ford Focus attributes.

Under the skin of the Ford Focus prototypes is a state-of-the-art lithium-ion battery pack with the capacity of 23kWh and a chassis-mounted 100kW permanent-magnet electric traction motor. The BEV will have a range of up to 75 miles and a top speed of up to 85mph. Charging the batteries will take between six to eight hours using a common 230 volt grid.

The high-voltage air-conditioning compressor is a key feature of the 2010 Ford Fusion Hybrid, recently introduced in the North American market.

The successful co-operation that is allowing this UK programme to proceed also shows the potential for similar prototype vehicle fleets to be considered for trials in other European countries.