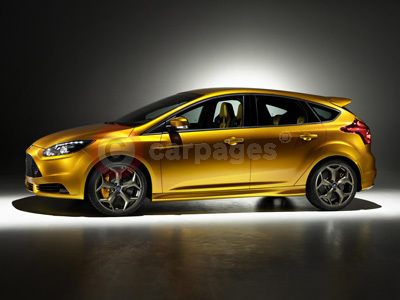 For the first time, the complete global Ford Focus line-up of production-ready bodystyles will be displayed together, providing customers with a full insight into this significant new model before it goes on sale in Europe and North America early in 2011.

Ford is also delivering on its promise to introduce a global performance version of the new Focus with a world premiere for the exciting flagship of the range, the muscular 250PS Ford Focus ST. The dramatic new Ford Focus ST will launch in early 2012 and will be revealed on 30th September at the Ford stand by Alan Mulally, Ford's president and CEO, and Stephen Odell, chairman and CEO, Ford of Europe.

The formal launch of the full production-ready Focus range in Paris is highly significant for Ford, as it signals the introduction of the first truly global product developed under the Company's ONE Ford strategy.

The Ford Focus is Ford's most significant car range globally. Developed at Ford's global centre of excellence for Small and Medium Cars in Germany for sale in over 120 markets worldwide, the next-generation model is the most important Focus yet and is created from Ford Motor Company's new global C segment platform with up to 80 per cent parts commonality around the world. This platform will underpin at least ten vehicles globally and account for two million units of annual production by 2012.

With the complete range of bodystyles on display in Paris - sporty five-door and stylish wagon come to the UK - show goers will have an exclusive opportunity to see and experience the car's individual design and class leading technology first hand.

The new Ford Focus, on sale in Britain in March/April 2011, promises to outsmart its competitors by offering more affordable technologies and features than customers have ever experienced in this critical vehicle segment. Next-generation Focus also offers customers the highest standards of quality and detailed craftsmanship, plus outstanding fuel economy, and will take the legendary Focus driving dynamics to a new level.

At the 2010 Geneva Motor Show, Ford Motor Company's group vice president for Global Product Development, Derrick Kuzak, promised that an exciting new performance version of the next generation Ford Focus was in development.

At Paris, Ford is delivering on that promise by revealing an early preview model of the exciting next-generation Ford Focus ST. Targeted for launch in all global markets from early 2012, the all-new Ford Focus ST will be Ford's first high-performance model developed under its global Performance Vehicles strategy.

The new range-topping Ford Focus - which features a unique 250PS version of the new 2.0-litre, four-cylinder Ford EcoBoost engine - will be completely true to Ford's ST heritage, offering driving enthusiasts an intoxicating cocktail of exhilarating performance and handling accompanied by an addictive sound.