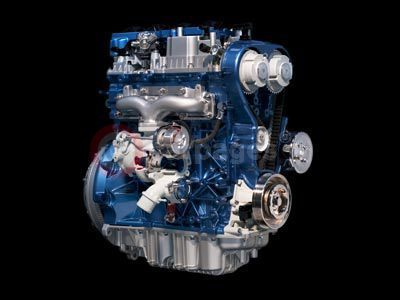 The 1.6-litre EcoBoost petrol engine in new Ford Focus has been acoustically tuned to produce an impressively sporty growl under hard acceleration. It features special technology that filters out unwanted engine noises, while transmitting pleasing sounds straight inside the car for maximum driver enjoyment.

Ford's 1.6-litre EcoBoost is one of the most technologically advanced engines in production, combining high-pressure direct injection, a low-inertia turbo, plus twin independent variable cam timing.

These three features give the EcoBoost the power and torque of a much larger engine without the size, weight and fuel economy penalties. There is, however, one slight downside to this technology.

Turbocharging inevitably muffles an engine's natural voice, especially higher up the rev range. Floor the throttle in any turbocharged car and the whoosh of the turbo will overpower the more rewarding engine sound.

Ford's engineers have overcome this aural obstacle in the new Ford Focus by adding a small, but hugely effective gadget called a sound symposer to the 1.6-litre EcoBoost engine. The symposer is a sound box that harvests good, engine-generated frequencies from the air intake system and then sends these sound frequencies straight into the passenger compartment.

Ford engineer Ralf Heinrichs explained: "All engines have their own sound character and it is the exhaust and/or intake system which determines this character. Typically, the exhaust system determines engine sound at low revs whereas higher up the rev range the intake system gives the engine its unique voice.

"With turbocharged engines, the turbo is an integral part of the intake system and it masks the sound of induction because the whoosh noise becomes dominant when the turbo is spinning at speed.

"We needed to recapture or recreate that exciting induction noise so what we've done with our sound symposer is capture engine oscillations in the intake system downstream from the turbo and then direct them straight into the cabin for a good sporty growl."

The symposer measures just 60 x 50 x 40mm in size and has four internal chambers - two chambers on the engine side and two on the outlet side. The chambers are separated by a moveable flap. Under hard acceleration, the pulsations generated in the intake, or engine side, meet the pivoted flap, producing sound waves which are then transferred to the outlet chambers.

These pulsations are then transmitted into the passenger compartment via a sound pipe which runs through the bulkhead and into the car's cabin.

"The symposer rebuilds the engine note by revising the signal to noise ratio," said Ralf. "Our sound symposer really comes alive when the oscillation frequency, the frequency of the sound waves, is between 250 to 450Hz."

Ford's sound symposer has huge tuning potential. It's not just the frequency range that can be modified, the sensitivity of the sound feedback can also be adjusted.

"We originally developed this technology for the 2005 Focus ST," said Ralf. "It is also a feature on the Focus RS and Focus RS500. Both these vehicles have a very high sound feedback or large sound window due to aggressive symposer tuning. The 1.6 EcoBoost in new Focus is more moderately tuned but still delivers much more feedback than the current Focus."

A big advantage with Ford's sound symposer is that it doesn't compromise refinement. In fact engine noise is exceptionally quiet under most operating conditions.

Ralf's team uses hyper-sensitive audio equipment to ensure the sound symposer works only when it should do and that the noises it delivers are rewarding without being overpowering.