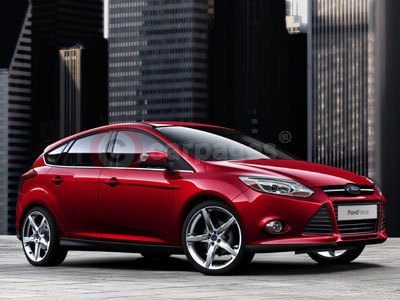 The next-generation Ford Focus makes its worldwide debut at the North American International Auto Show (NAIAS) in Detroit, providing customers with more affordable technologies and features than ever in this segment, as well as detailed craftsmanship, outstanding fuel economy and a new standard for driving quality.

Both the four-door saloon and five-door hatchback body styles of the next-generation Ford Focus are previewed prior to their production start for Europe and North America late in 2010 and market launch early in 2011.

Production of the next-generation Ford Focus will begin simultaneously in Europe and North America in late 2010, with individual market launches starting early in 2011. Initial production will be concentrated at the Saarlouis (Germany), Michigan (United States) and Chongqing (China) Assembly Plants.

The new FOrd Focus will be one of up to 10 unique models to be built from Ford's new C-car platform, which is expected to generate total sales in all regions of two million units annually by 2012. The first of these will be the new Ford C-MAX and Ford Grand C-MAX - unveiled at the 2009 Frankfurt Motor Show - for launch in Europe in the second half of 2010.

With its striking front end, sleek profile, dramatic rising beltline and athletic stance, the new Focus clearly telegraphs the rewarding driving experience that awaits customers when they take to the road.

This dynamic quality is reinforced by the distinctive design of the interior. The new Ford Focus has an extremely modern, cockpit-style interior, with the stylish centre console wrapped around the driver and providing outstanding access to the vehicle's major controls and display panels.

A key element of the interior is the quality of craftsmanship. The cabin's bold and contemporary graphics, the sculptured shape of the soft-touch instrument panel and the choice of superior trim materials all help to give occupants the feeling that they are travelling in a premium-class car.

The engaging driver appeal of the new Ford Focus is magnified by a powertrain range that delivers spirited performance and targets outstanding levels of fuel economy and CO2 emissions.

The global powertrain lineup for the new Ford Focus will include a range of state-of-the-art Ford EcoBoost four-cylinder turbocharged direct injection (DI) engines - including the 1.6-litre unit in Europe and a choice of advanced and improved Duratorq TDCi common-rail diesel engines, all of which offer reductions in fuel consumption of between 10 and 20 per cent compared to the outgoing models.

The new Ford Focus will go on sale in the UK in the first quarter of 2011.