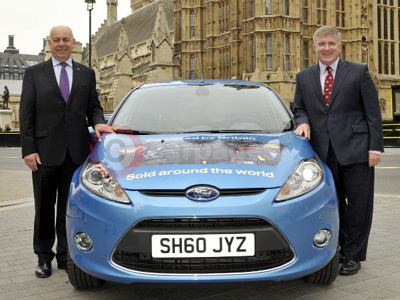 The Ford Fiesta has embarked on a 15,000-mile round-the-world trip that will see Ford Fiestas visit a total of 21 countries.

The drive is a demonstration of the "One Ford" global strategy that will see future Ford vehicles, including the Ford Fiesta and the next generation Ford Focus, sold globally. The round-the-world programme will take over 50 days to complete. It has already covered North America with the rest of Europe, the Middle East, Asia and Australia to conquer.

UK-built engines are a key part of the "One Ford" strategy and during the Ford Fiesta's 500-mile leg across the UK, the car stopped off at Ford's Bridgend engine-plant - where the car's 1.6-litre petrol engine is built.

On its arrival in London Business Minister, Mark Prisk drove the Ford Fiesta in Westminster in recognition of Ford's significant investment and manufacturing footprint in Britain.

He said: "It is a great achievement for the UK that nearly a third of all the cars built by Ford globally will have an engine that's been designed and built by Ford in the UK. It is a good example of the UK as a world-class manufacturing base that can successfully export all over the world."

Increasing exports, and re-balancing the economy are crucial to the UK's future economic success, and Ford in Britain is playing its role by focusing on producing the vital components that power its vehicles worldwide.

The engines that Ford manufactures in Dagenham, East London, and Bridgend, in Wales, engineered at the Ford Technical Centre in Dunton, Essex, are being exported around the world. The engines power the new generation of Ford vehicles that are designed to be sold globally. Ford's UK manufacturing plants are geared-up to produce two million engines a year as well as transmissions and commercial vehicles.

Joe Greenwell, chairman of Ford Britain said: "Ford's UK operations are vital to our global strategy and they draw on an engineering resource that has tremendous potential to expand. Just as Ford's British engines power our business globally, so Britain's manufacturing sector can power the economy to a sustainable recovery."

Ford Bridgend in Wales is producing the new 1.6-litre Ford EcoBoost petrol engine, which offers CO2 and fuel savings of up to 20 per cent compared with conventional petrol-engine technology. It debuts in the new Ford C-MAX range this autumn.

Engines assembled at Ford Dagenham emit as little as 98g CO2/km whilst giving up to 76.3 mpg and feature in the economical Ford Fiesta and Ford Focus ECOnetic models. Fuel-saving ECOnetic technology has also been extended to Ford's commercial vehicles, including the Southampton-produced Ford Transit ECOnetic.

Ford's research and development centre in Dunton is the country's largest automotive engineering facility and is one of four UK Ford sites covering research, development and manufacture of low-CO2 technology for cars and commercial vehicles.