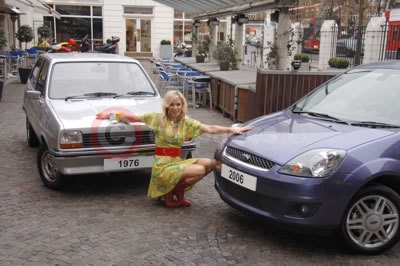 When Ford launched its Fiesta in 1976 it hoped to create a new best-seller in the UK market - but instead it created an automotive icon that would not only redefine the city car market forever, but also capture the hearts and minds of a whole generation of youthful customers.

With an entry-level price of just £1,856, the Fiesta arrived at time when the UK economy was dramatically shrinking, and it instantly satisfied the nation's desire for affordable fun motoring - a passion that has continued for 30 years and 3.2 million sales in the UK alone.

That’s enough Ford Fiestas, if stacked on top of each other would reach higher than 500 Mount Everests. Parked bumper to bumper, the queue would stretch from London to Bali.

In 1976 the average weekly wage was around £70, income tax was 35 per cent and inflation soared to 17 per cent. It was the year of punk, economic austerity and Star Trek. Personal computers, MP3 players, mobile phones and the internet remained the dreams of scientists.

The Ford Fiesta made its UK debut during the famously long, hot summer of '76 to immediate acclaim. Yet nobody imagined it would remain the nation's favourite small car into the following century.

Today, 30 years on, with a 14.2 per cent segment share (full year 2005), the Fiesta remains the UK's most popular choice among private 'retail' customers in the supermini sector. With annual sales of almost 84,000, Fiesta also ranks as the fifth overall best-selling car in the UK.

So what else has changed in 30 years? Though the term "eco" meant little in 1976, the Fiesta's impressive fuel economy and low emissions were already making a significant environmental contribution, well before such performance became a requirement. However, today's ultra-clean and environmentally friendly Fiesta puts the first models into perspective.

It would, for example, take 50 new Fiestas to produce the same toxic emissions as a single Mk I in 1976. Unlike the original Fiesta, the current version is 85 per cent recyclable, too. And while the Mk I was notably economical for its era, it could hardly have matched the ability of the current Ford Fiesta to travel the 650 miles from London to Inverness on a single tank of fuel.

Hi-tech features that would have seemed like science fiction back in 1976 include Bluetooth, voice control, satellite navigation and Automatic Temperature Control (ATC). The design has been revised inside and out, and a vibrant new palette of colours provided for body and trim.