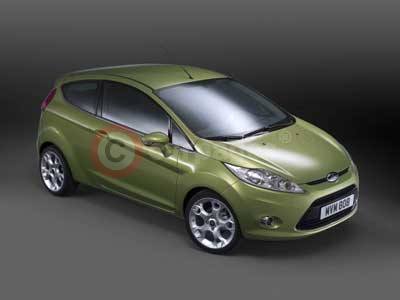 The arrival of the New Ford Fiesta in the UK this month coincides with accelerated sales of the brand's low emission cars.

Latest figures from the Society of Motor Manufacturers and Traders (SMMT) report a 38 per cent surge for these Ford models – to be joined by the new Ford Fiesta at motor show.

The dramatic swing has buoyed Ford's range of cars emitting under 120g CO2/km and achieving over 65mpg.

All Focus, Fiesta and Fusion models equipped with the Dagenham-built 1.6-litre TDCi engine achieve CO2 emissions of under 120g/km.  Sales of the new Ford Focus ECOnetic, at 114g/km, and Ford Fiesta 1.4 TDCi are also included in this segment, which grew by 38 per cent in the first six months of the year.

At the British International Motor Show Ford will unveil a new addition to its ECOnetic range, the Ford Fiesta, which is set to offer best CO2, fuel economy and value of all four-cylinder, four-seat cars on the market.

"The British motor show is scheduled to bring half a million car enthusiasts to Ford's East London heartland," said Roelant de Waard, Ford of Britain chairman and managing director.  "They will see new Fiesta, with sporty Zetec-S and frugal ECOnetic variants on the stand.  Many will pass our wind-powered Dagenham plant on the way, where annual production will top 1,000,000 engines this year in response to the shift to eco friendly models."

The SMMT's data shows that Ford cars and commercial vehicles took an increased share of June's market compared with a year ago.  Last month 15.3 per cent of registrations were for Ford vehicles – up 0.2 percentage points over June 2007 in an overall reduced market.  For the first six months of this year, Ford's share is 16.2 per cent compared with 16.5 per cent for the same period last year.

Ford cars sold to retail, or private purchasers, last month rose by 7.6 per cent versus June 2007.  They were mainly drawn to Ford by new Focus, Kuga and S-MAX, the SMMT said.

Ford cars' total retail share this year to date, at 13.1 per cent, is 1.1 per cent higher than the first half of 2007 as Ford rebalances its mix in favour of retail sales and forgoes some short cycle fleet business.