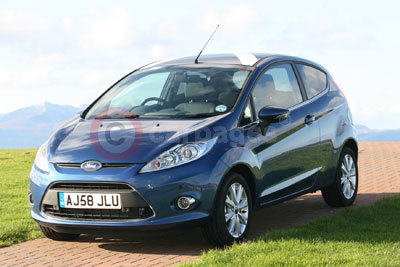 Ford has recorded a historic achievement by winning the Scottish Car of the Year title for the second consecutive year.

The all-new Fiesta took top honours at the Fairmont, St Andrews, on Friday night having earlier been crowned Scottish Small Car of the Year. It is the first time that any of the motor manufacturers has won the coveted accolade on a back-to-back basis.

The Blue Oval badge also triumphed in the Sports Utility Vehicle sector when the Kuga was voted best in class.

Other category winners on the night included Audi, Jaguar, Mazda, Nissan and Volkswagen. However it was the supermini that swept away the judging panel consisting of members of the Association of Scottish Motoring Writers.

On receiving the trophy, Ian Slater, Vice-President Communications and Public Affairs for Ford of Europe, said: "We are delighted the new Ford Fiesta has been voted the 2008 Scottish Car of the Year.

"I am especially pleased for the Fiesta project team of designers and engineers that their vision and hard work has been so generously rewarded. Everyone at Ford joins me in thanking the Association of Scottish Motoring Writers for this accolade."

Ford won the inaugural Scottish Car of the Year title in 1998 and celebrated again last year when the new Mondeo took the honours.

Last night Bill Caven, president of the ASMW, said: "To win the Scottish Car of the Year once is more often or not a marvellous achievement. However to triumph again the following year is simply unbelievable.

"The all-new Ford Fiesta was simply streets ahead of everybody else when it comes to offering something fresh, dynamic and value for money.

"Within hours of getting our first drive in the car we were all blown away by the experience. And when you consider the high calibre of the other new models up for consideration it is a truly tremendous feat by the Blue Oval badge.

"There is always a degree of trepidation amongst motor manufacturers when it comes to replacing a best-selling model with the next generation car. Will it live up to past reputation and appeal? Will it take the brand forward?”

Bill continued: "Ford has maintained from the outset that the new Fiesta would set the benchmark in its sector.

"It has certainly delivered big time and been true to its word. This is going to be an enormous seller for them in the coming months, and deservedly so."

The new Fiesta took the overall title after beating the Jaguar XF which won both the Luxury and Diesel categories.