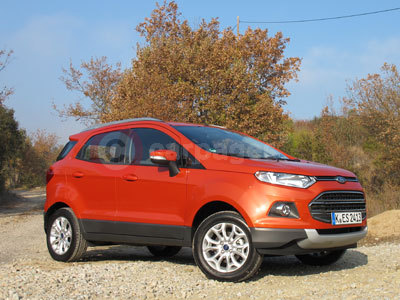 Ford's mini-SUV, the EcoSport, is a prime example of how global the motor industry has become. New in the UK for 2014, it is based on a model that was originally developed in Brazil for third world markets. It has been revised and upgraded for European customers, and it is built at a factory in India.

It took a while for Ford to catch up with the growing popularity of small SUVs as urban-orientated family cars, but the EcoSport is the right size and specification to do well. It has a butch visual appeal and the chunky look of a 4x4 even though it isn't one. At least, not here. It is only available with front-wheel-drive, although a 4x4 version is sold in some other parts of the world.

There is a name issue to explain. According to Ford, its award-winning EcoBoost engine range should be pronounced Ee-coboost. But the EcoSport is supposed to be said as Ek-oSport. Confusing, yes, but it's dictated by local pronunciation where they originate: the engines hail from Europe, and the car began life elsewhere.

The EcoSport comes in only one trim level, which is Ford's high-spec Titanium. Prices start from £14,995 for a 1.5 petrol 2with manual gearbox, and rise to £17,495 for the best-equipped diesel.

There is nothing about the EcoSport to quicken the pulse. Its performance is adequate rather than impressive. The 1.5 litre diesel has a top speed of just under 100 mph and a somewhat leisurely 14 seconds 0-62 mph acceleration time. If you want something a bit more sprightly, go for the EcoBoost petrol engine which has a higher top speed for more relaxed motorway cruising, and knocks more than a second off the standing start sprint time.

The diesel is the one to go for if you want more pulling power with better economy. It has the highest torque output, at 150 lb ft (25 lb ft more than the one-litre petrol EcoBoost) and also has the best fuel economy at a combined average of 61.4 mph (53.3 mpg for the EcoBoost, 44.8 for the 1.5 petrol).

CO2 emissions range from 120 g/km with the diesel, meaning a band C tax disc which is free for the first year and £30 a year thereafter, rising to 149 g/km for the 1.5 petrol model, in band F and costing £140 annually.

This is a 7-year+ news article, from our Ford archive, which dates back to the year 2000.

If in doubt check with your local Ford dealer as car prices and technical data will have changed since 2014.

Ford EcoSport Images may not be UK specification cars. Colours and exterior and/or interior elements may differ from actual models.