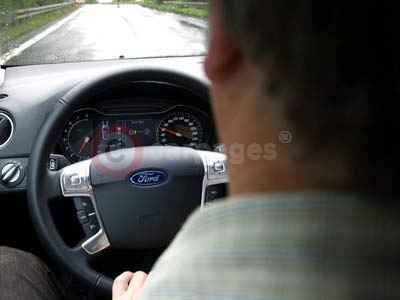 "Driver fatigue is a serious problem and one that can affect anyone," said Ford engineer Margareta Nieh, who helped develop Driver Alert. "When drivers become drowsy they tend to drift off line as they lose concentration and then make sudden corrective steering inputs. What we've developed is a Driver Alert system that picks up on these erratic driving movements by detecting sideways yaw."

The Drive Alert System features a forward facing camera mounted on the back of the rear view mirror, and connected to an onboard computer it can identify lane markings on both sides of the vehicle.

Although the camera is programmed to check for lane marking on both sides of the road, it can still function if markings on just one side are detected. The system can also be switched off via the instrument cluster.

When the vehicle is moving, the camera analyses the road ahead, predicting where the car should be positioned, taken the lane markings into consideration. It then measures where the vehicle actually is, and if the difference is significant enough, a warning alert is issued.

"Let's imagine the driver is tired, their concentration levels start to drop and the vehicle starts to drift from side-to-side," Nieh said. "The software will detect this change in the vehicle's behaviour, triggering a two-stage warning process."

"If the driver fails to acknowledge the hard warning, the system can only be reset by stopping the car and opening the driver's door," Nieh said. "The system then recognises that perhaps you have changed drivers or that you have had a rest and can continue."

"The technology is very clever," Nieh said. "It's been programmed to recognise intentional lane changing manoeuvres so it won't issue a warning whenever you overtake, for example."

The most likely time for sleep related crashes are: