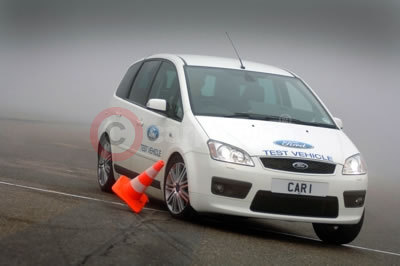 As drinkers toast Britain's move to 24-hour licensing, Ford has issued a strong anti-drink drive message after researching the consequences of getting behind the wheel when over the limit.

Ford's volunteer drink driver consumed alcohol under test conditions until his levels were one and a half times the legal limit. He found confidence soared when driving on the secure track - just as his accuracy and control plummeted.

Ford staged the experiment at its European proving ground at Lommel, Belgium, where six driving control tests were attempted every two hours during a day of continuous drinking. Twelve units of alcohol - glasses of wine - were consumed in total during a six-hour period. The driving tests, using the latest Ford Focus C-MAX, were:

"The time lag between consumption and feeling the alcohol's effects felt quite long," said 'drink driver' Oliver Rowe, of Ford of Britain's press office, whose alcohol breath reading reached 50. Britain's legal limit to drive is 35 microgrammes of alcohol per 100 millilitres of breath.

"If I had judged whether I was under the limit during these first couple of hours, I would have said yes. In reality reaction times were deteriorating fast, reflected by my performances on the track. My growing confidence and 'raring to go' attitude when under the influence produced more aggression. This resulted in exaggerated steering, especially on the slalom, and great difficulty in maintaining the set speeds."

Ford's drink drive exercise was staged as November's round-the-clock licensing laws came into force and as police forces prepare to launch their own Christmas campaigns to send a stern anti-drink drive message to party goers.

There is renewed concern about drink driving in Britain as, after two decades of decline, statistics show alcohol-related deaths and injuries on the UK's roads to be rising. Last year fatality figures were the highest since 1992, with a total of 590 deaths (Institute of Alcohol Studies, Sept 2005). Today one in five road deaths are alcohol related.

Kevin Delaney, head of road safety at RAC Foundation said: "The RAC Foundation for Motoring welcomes this comprehensive and practical test which clearly demonstrates the dangers of drinking and driving. Alcohol, even in quite small amounts, adversely affects driver performance, hazard perception, co-ordination and our ability to anticipate and respond to emergencies, while at the same time increasing confidence and reducing inhibitions- a dangerous combination.

“The simple message about drinking and driving is don’t, and don’t drive the morning after a party when your alcohol level may still be above the legal limit."