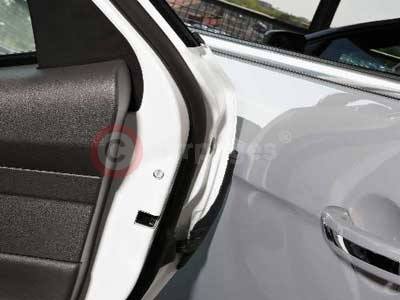 A new feature has been introduced by Ford to debut in 2012 on the Ford Focus, which helps to prevent against dents and scratches.

The Door Edge Protector has been designed by Ford engineers in Cologne, Germany. When the door is opens, a protective flap concealed in the door automatically moves into position to provide a buffer in order to prevent paint and bodywork damage. The cost of repair for a dented car door can cost £250 and 85% of British drivers believe that perpetrators of the damage would not confess to the incident.

The Ford Door Edge Protector fully extends into its protective position at a door opening gap of less than 15cm. The feature protects against over 90% of variously positions obstructions to front doors and 85% for rear doors.

It takes 60 milliseconds to retract the Door Edge Protector to allow doors to be slammed shut and also includes a clutch mechanism that can prevent damage if the flap is obstructed when returning. A rubber compound that can withstand thousands of usage cycles and creates a minimum of noise as it springs into position is used. For heavy users, the protective flap can be quickly and easily replaced by clipping it into place.

"The Door Edge Protector will be one of those features that we think will make customers say 'Why didn't someone think of this sooner?'" said Matthias Tensing, product development system engineer. "It will help parents with children in the backseat or anyone who needs to park in a tight spot."

"The small scuffs and scratches that result from car doors being opened into obstacles, or from having a car door opened into your own vehicle, can be frustrating for car owners – often too small to be covered by insurance but expensive to have repaired out of car owners’ own pockets," said Matthew Avery, crash and safety research manager at Thatcham, the UK Motor Insurance Repair Research Centre.

"Ford's new Door Edge Protector is an excellent innovation for preventing these annoying dents and scratches. Any system that can reduce the risk of damage to your own or someone else's vehicle is worthy of recognition, but one that operates so effectively without affecting the looks or performance is particularly noteworthy."