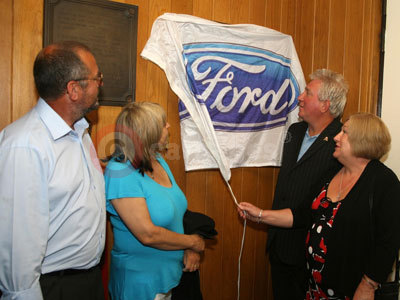 Celebrations marking 80 years of manufacturing at Ford Dagenham have included a dedication to the estate's best-known hero.

On 3rd July 2009, 58 years to the day since the quick actions of boilerhand Sidney Tillman avoided a major incident, his grandchildren gathered in the boiler control room of London's largest industrial employer to unveil a plaque and two medals commemorating his brave actions.

In the middle of the night on 3rd July 1951, a high-pressure pipe burst - beginning a chain reaction that resulted in scalding mud, steam and blast furnace gases pouring into the boiler room. Rather than leave his post, Sidney Tillman covered his head and stayed at the boiler room's controls to bring the situation back under control. His dedication to duty averted an explosion which would have endangered the Ford Dagenham site.

Tony Tillman, from Clacton on Sea, was one of four Tillman grandchildren who attended the dedication and said: "He was a very modest man and never spoke much about what he did but he would have been very proud of this event today - he was a Ford man through and through."

Sidney Tillman, who died in 1962 aged 62, remains the only Ford employee to receive the British Empire Medal - the highest award for industrial bravery. He also received the Daily Herald newspaper's order of industrial heroism and both medals now hang by a plaque commemorating Sidney Tillman and his shift in Ford Dagenham's modern day boiler control room.

Darren Bearwish, Dagenham's superintendent of manufacturing engineering, said: "The actions of Sidney Tillman and his colleagues were extraordinary and serve as an inspiration to us all. The facilities, equipment and procedures we work with today make the events of 1951 almost unimaginable: three 50 megawatt dual fuel natural gas/gas oil boilers can provide steam to the whole site - a far cry from the demands on the coal-fired boiler room of the 1950s."