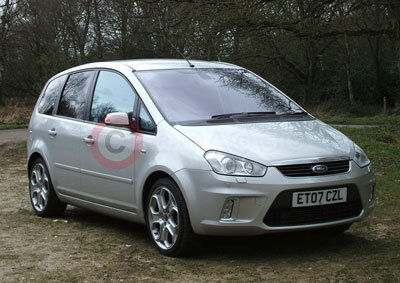 The Focus C-MAX was launched in 2003 to much acclaim. It gave rise to the larger S-MAX, a vehicle that has in turn influenced the new C-MAX.

With the advent of the new C-MAX, Ford decided to drop the ‘Focus’ name and make the car and the S-MAX a separate group of Multi Activity Vehicles or MAVs, at the same time taking the opportunity to give  them a similar look.

The new C-MAX has a completely new front end in keeping with Ford of Europe’s ‘kinetic design’ philosophy, in simple terms that means that it should look as if it is moving even when it isn’t. I can’t think of any car that achieves that goal but the new C-MAX certainly has a more dynamic appearance than before.

Usually, when manufacturers use words like ‘sculpted’ it tends to be something of an exaggeration but it does apply to the new front bumper but, unfortunately, silver doesn’t really do it justice, so it might be best to pick one of the other ten colours. The one-piece design is positioned lower than before and incorporates a shapely, new, lower trapezoidal grille with vertical fog-lights on the top two trim levels.

The upper grille hasn’t escaped the redesign and now features a larger blue oval and a chrome trim bar on the leading edge of the bonnet – a design feature representing the new ‘face’ of Ford. The inner corners of the new headlamps form the starting point for the strong feature lines that flow up towards the windscreen, forming a wide, three-plane bonnet.

The rear also has a new bumper, which is longer and rounder than on the previous model, while the vertical tail-light cluster now features a strip of distinctive and very bright, LEDs; a ‘first’ for Ford.

The interior hasn’t been left out but sensibly, Ford has kept the elements that made the original C-MAX so popular; that is to say the rear seat arrangement. There are two formats: the standard version is three individual seats in a 40:20:40 ratio that can be tumbled, folded or removed altogether for extra load space, which can be anything from 473-litres up to a maximum of 1,633 litres.

Ford C-MAX Images may not be UK specification cars. Colours and exterior and/or interior elements may differ from actual models.