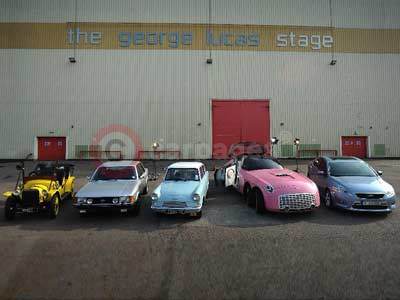 Elstree Studios in London has played host to five of Ford's most memorable vehicles featured on film and television, celebrating 100 years of Ford of Britain.

The Ford Anglia 105E from Harry Potter and the Chamber of Secrets, lined up alongside the pink FAB1 from Thunderbirds, James Bond’s Ford Mondeo from the 2007 film Casino Royale, a Ford Granada as seen in The Sweeney TV series and Dr Who’s yellow Edwardian vintage car.

"I'd been involved with Ford Anglia clubs for 30 years when I was asked by the film makers to provide a car for the movie,” said owner John Colyer. “After that it just took off and I ended up supplying around 15."

The six-wheel Ford-badged FAB1 starred in the 2004 Thunderbirds film is famous for functioning both on the road and in the air. The model is completely road-legal and fully operational.

Daniel Craig debuted as James Bond in Casino Royale ahead of the launch of the production Ford Mondeo in 2007, drove the hand built prototype. Following the release of the film, the car was donated by Ford to the Ian Fleming Foundation and can be viewed at the Bond exhibition at the National Motor Museum in Beaulieu.

The Police drama The Sweeney and science-fiction drama Dr Who have both featured Ford vehicles. The car chases in The Sweeney featured the Ford Consul GT and Ford Granada.

An Edwardian vintage car in canary yellow with unique WHO 1 number plate and indicator 'hand' is a regular at Dr Who conventions and has been used by several Dr Who fans for weddings.