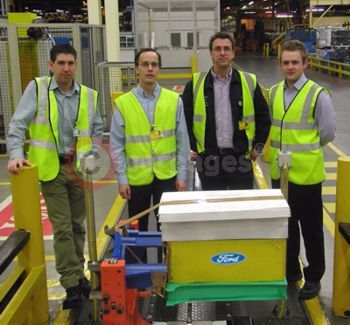 Ford engineers at Bridgend plant were thinking outside the box when they came up with the auto industry's first cardboard engine.

As the plant gears up for next year's introduction of a new six-cylinder engine for the Premier Automotive Group, its prototype centre sent a cardboard box substitute down the production line.

Putting together a cardboard engine is part of the detailed production planning process now underway at Bridgend. The aim was to ensure maximum efficiency by ensuring the engine passes all points on the assembly line without fouling or sticking.

This novel approach is one of the many new techniques and working practices introduced by Bridgend's prototype centre in the run-up to full production.

The new engine, known in the plant as I6, will be built on the same advanced production line as the 4.4-litre V8 launched last year. This demands the hands-on approach demonstrated by the prototype centre to integrate six-cylinder production on the eight-cylinder assembly line.

Build operators have also fine tuned a miniature assembly line in Bridgend's prototype centre where engines are hand-built for testing. Each engine is currently assembled by two-person teams in two shifts, but when it goes into full production in early 2006 the I6 will be rolling off line at a rate of thousands a week.

Plant manager Bob Murphy said: "Ideas can be tried out on our mini line first, before being taken to the full scale assembly line for verification. Or we can do the reverse - bring engines off the assembly line and test them in the prototype centre without interrupting production. The prototype build team is highly skilled and specialised - and passionate about what they do."

Launch manager Jaime Ortiz-Canavate is leading the project. "This is a great team of enthusiastic people who have brought a lot of fresh ideas to their work," he said.