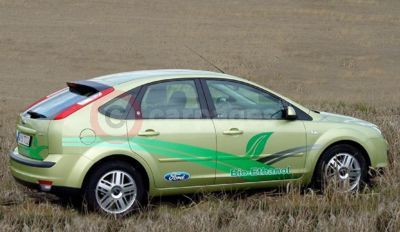 A Ford Focus, which can run on bioethanol, will feature in next month’s showroom sales brochure and the car maker is also considering supporting a strategic network of bio-fuel pumps in London.

The introduction of the new Focus Flex-Fuel Vehicle in a few weeks coincides with next year’s roll out of a 40 strong bioethanol fleet in Somerset and the introduction of five refuelling sites in Taunton, Bridgwater, Yeovil, Bristol and Bath.

A pilot scheme using Swedish specification Focus FFV models publicised in the Somerset area has seen a dramatic number of calls to the council from people who want to buy a Focus FFV and use bioethanol made from locally grown surplus wheat.

Ford expects to sell 200 of the special Focus models in two years in the county and other authorities are about to follow the lead of Somerset, which is planning to hold a special bioethanol national conference in Taunton next spring.

Ford believes the project is now strong enough to offer a Focus FFV.

The price of the 1.8 litre, 125PS, Focus FFV is £14,095 and Andy Taylor, Ford’s European Corporate Citizenship Director said it is pitched between comparable existing 1.6 and 2.0 litre models and initially it is be being offered in five door or estate derivatives. The Focus C-Max is also likely to be offered with the FFV engine later.

"The beauty of the Focus FFV is that it will not carry a prohibitive price premium and requires no special driving skills and can even be refuelled with normal unleaded petrol if bioethanol is not available," he said.

The 1.8 litre engine has been modified with hardened valve seats, larger fuel pump and non-rubber lines, and the electronics have been changed to permit it to sense whether unleaded or bioethanol is in the normal fuel tank.

Although bioethanol is 30pc less economical than unleaded petrol it does not attract as much duty and pump prices are likely to be highly competitive as a result.

The main attraction of bioethanol apart from its homegrown credentials is the fact it only emits the same amount of carbon dioxide it absorbed in growing the wheat.

The Government says all forecourts must offer five per cent Biofuel by 2010 or face financial penalties, in accordance with EU legislation.