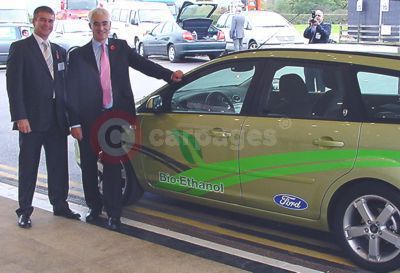 The Ford Focus Flex Fuel Vehicle was the Transport Secretary's chosen car to travel to the Environment Friendly Vehicle Conference, which continues today in Birmingham.

Alistair Darling MP arrived in the bioethanol-version Ford Focus at the high profile industry event, where he declared the Government's intention to make transport fuels greener. By 2010, five per cent of all fuel sold on UK forecourts will come from a renewable source.

The Ford Focus Flex Fuel Vehicle (FFV) can run on either bioethanol (E85) or unleaded petrol in any mix in the same fuel tank. Bioethanol is a renewable transport fuel made from ingredients such as wheat or sugar beet. While only a flexible fuel car, such as the Ford Focus at the Environment Friendly Vehicle Conference, can be driven just on bioethanol, any vehicle can be filled with fuel with five per cent renewable content.

Since its launch in July, the Ford Focus FFV has continued to be in the spotlight as the first production biofuel car on sale in Britain. The 1.8-litre car, priced £14,095, delivers 125PS and fulfils Euro 4 emission standards.

Andy Taylor, Ford's European corporate citizenship director, said: "The Ford Focus has been Britain's favourite car every year since 1998. Ford moved fast to launch a biofuel Focus and welcomes today's commitment to green fuels. All this would be for nothing without simultaneous moves to install a fuel supply infrastructure alongside the availability of the Ford Focus FFV. We are proving what can be accomplished when major players work towards a common goal."

Initial orders for the Ford Focus FFV car came from the country's first regional biofuel project, which brought Ford as vehicle supplier together with a bioethanol retailer and local fleets. Somerset Biofuel Project partners will take delivery of their first 40 Ford Focus FFVs from March next year, when bioethanol will be available from five refueling points in the county. Ford aims to sell 200 Ford Focus FFVs in Somerset in the next two years.

Green Spirit, the fuel subsidiary of farmers' cooperative Wessex Grain, has submitted planning permission for a bioethanol production plant at its Henstridge grain depot in Somerset. The facility will be able to convert 340,000 tonnes of locally grown wheat into 131,000,000 litres of ethanol a year at full capacity.