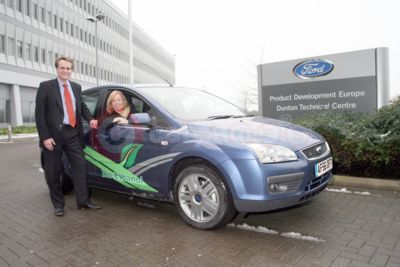 The council is looking at becoming more environmentally friendly in all areas and new Ford biofuel cars are leading its transport efforts.  Ford FFVs can run on the renewable fuel bioethanol, made from UK-grown crops such as wheat and sugar beet, or normal unleaded petrol in any mix in the same fuel tank.

There is no price difference between a 1.8-litre Ford Focus or C-MAX FFV and its petrol-only equivalent.  Ford has also announced plans for flexifuel versions of its Mondeo, S-MAX and Galaxy models.

Ford's European sustainability director, Andy Taylor, handed over the council's first FFV, which is on a month's loan, to Councillor Peter Martin and Graham Tombs, service director for environment and commerce.  Andy said:  "Bioethanol motoring goes a lot further towards reducing carbon emissions than driving on traditional fuels.  This is because the CO2 absorbed by crops grown to make bioethanol cancels out up to 70 per cent of the car's emissions."

Coun Peter Martin, cabinet member for environment and planning,  said: “We are delighted to be using and evaluating the Ford Focus FFV over the next month as part of our commitment to cut carbon emissions. Reducing our carbon footprint is a key priority for us and this includes looking at car usage within the council.”

Another Essex political figure to have shown an interest in Ford FFVs is Basildon MP Angela Smith.  Ford's FFV technology was developed at Ford's Dunton Technical Centre, which is in Mrs Smith's constituency.

Dunton, the largest automotive research and development centre in Britain, was visited by its MP, who drove away in a test Ford Focus FFV.  She said:  "I was very impressed with the car.  There is a significant farming community here and, if they can diversify into growing crops for biofuel, there would be a three-way benefit for the farmers themselves, the car industry and the environment."