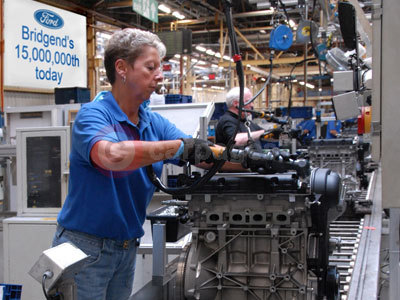 Increased output at Ford Bridgend has propelled the Welsh engine plant past its 15 millionth engine milestone.

The plant, which started production in 1980, specialises in engines for Ford's small and medium cars, which are both favoured by scrappage schemes and are enjoying higher sales as drivers switch to smaller, more economic models.

Ford production accounts for around 80 per cent of Bridgend's output, with the balance comprising six and eight-cylinder engines for Volvo and Jaguar Land Rover.

Graham Edwards, Bridgend plant manager, said: "All of our engine families are vital to Ford Bridgend. In these tough times it's refreshing to report good news, with extra production scheduled last month and again in September to keep up with demand. The plant's outlook is positive too following this month's announcement that our 1.6 EcoBoost debuts in the new Ford C-MAX next year."

Production volumes were up by 18.3 per cent year-on-year at Bridgend last month.