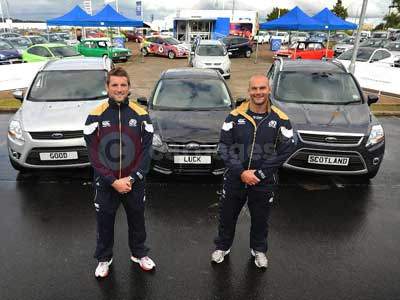 The Scottish rugby stars John Barclay and Geoff Cross have selected the Ford Focus and the Ford Kuga ready for the new season, and collected their vehicles two days after being named in the 30-man squad representing Scotland in New Zealand.

Geoff Cross, Edinburgh Rugby's prop, is one of 12 players selected for the premier global rugby tournament for the first time and John Barclay, Glasgow Warriors' flanker has won 29 international caps since making his debut in 2007.
Anthony Ireson, marketing director, Ford of Britain, said: "As we celebrate our centenary, it is only appropriate that Ford should continue our relationship with the game of rugby. We are delighted to extend our contract with Scottish Rugby and to provide these rugby stars with models from Ford's product range - the Ford Kuga and all-new Ford Focus."

Ford first sponsored Scottish Rugby in 2007, and confirming its ongoing sponsorship of Scottish Rugby as the official vehicle supplier. Scotland has more than 65 Ford dealerships and has sold nearly 12,000 cars during the first seven months of 2011.

The Scotland Rugby team will shortly travel to the southern hemisphere where they will begin training ahead of the first match against Romania, in Invercargill on 10th September 2011. On 14th September, they will face Georgia, Argentina on 25th September and the final pool match against England will take place in Auckland on 1st October 2011.