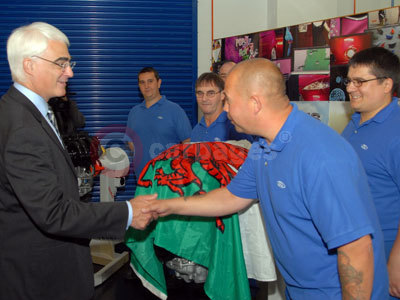 Chancellor of the Exchequer Alistair Darling paid a visit to Ford Bridgend, two months after the UK Government launched its scheme offering new car discounts in return for models aged 10 years and older being scrapped.

Ford's Welsh petrol engine plant is celebrating increased production levels - up by up to 55 per cent to satisfy demand prompted by the UK programme and other European vehicle scrappage schemes.

In April 2009 the number of cars sold in Europe with Bridgend's three Ford engines rose by 55 per cent compared with last year. Last month registrations were up by almost 43 per cent.

Ford of Britain chairman Joe Greenwell, who welcomed Alistair Darling, Welsh Assembly Government finance minister Andrew Davies and business leaders to the plant, said: "Two months of busy scrappage trading for Ford demonstrates the scheme's success in terms of sales, securing employment and environmentally, by putting cleaner cars on our roads. Today's an opportunity to press the case for continued close co-operation and partnership between the auto industry and Government."

Average CO2 for new Fords sold under the UK scrappage scheme is 134.9g/km, while equivalent emissions for the range 10 years ago were 188.4g/km.

Bridgend's 2,000-strong workforce is on track to assemble 600,000 Ford engines this year, as well as around 125,000 six and eight-cylinder engines for premium vehicle brands Volvo, Jaguar and Land Rover. Jaguar's all-new XJ unveiled this month will be available with the Bridgend-produced high-performance 5.0-litre V8 engine.

New investment already announced for the Welsh plant will bring Ford's next generation of low CO2 engines called EcoBoost to the site next year. The company's £70 million project, including £13.4 million from the Welsh Assembly Government, will deliver engines that provide up to 20 per cent better fuel economy, 15 per cent lower CO2 emissions and superior driving performance from a 1.6-litre four-cylinder unit.