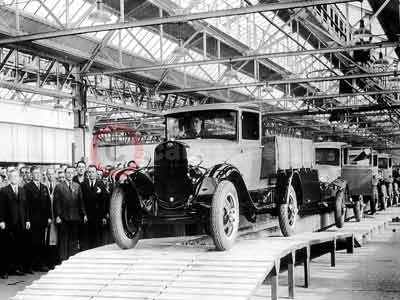 Ford of Britain is celebrating its centenary as well as 80 years of production at its largest UK facility, Ford Dagenham.

Nearly 11 million vehicles and over 8 million engines have been produced at the facility in 80 years.

Ford is investing £1.5 billion into affordable, low CO2 technologies throughout the next five years at its four UK engineering and manufacturing facilities.

Four engine types are produced at the main Engine Plant and Dagenham Diesel centre (DDC) which are used in more than 25 vehicle derivatives. Annually, nearly 1,000,000 diesel engines are produced for vehicles around the world. 300 product development powertrain engineers are based at the DDC.

Ford's lowest CO2 engine, a 1.6 litre TDCi diesel engine is manufactured at the DDC to be used in the Ford Fiesta and Focus ECOnetic models. The Ford Fiesta ECOnetic produces 95PS and with the Diesel Particulate Filter (DPF) offers a combined fuel economy figure of 78.5mpg and 95g/km CO2.

The Tooling Operations have been used for more than 50 years and employs around 325 people and utilises high speed machining, bench and try-out facilities constructing and commissioning dies and tools in order to support global stamping operations.

Dagenham is a key location for Ford's European Transport Operations, being the largest shipping point for finished vehicles into the UK, and for components supplied to the European Powertrain and Vehicle assembly plants.

Transport Operations logistics infrastructure at Dagenham includes: railway lines connected directly to the channel tunnel and UK main line; vessels travelling between the UK and Continental Europe are loaded and unloaded with the use of a deep water jetty; large truck fleets handle delivery of components and finished vehicles; and facilities for the preparation and servicing of company/fleet vehicles and Transport Operations' own equipment.