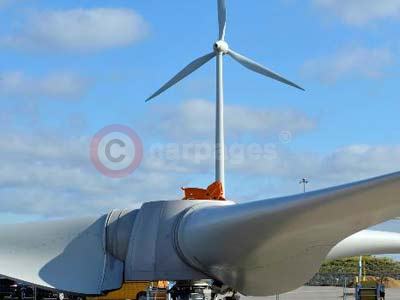 The third wind turbine has been completed at Ford Dagenham as the blades were fitted into place. The turbine, at 120m tall is the largest and is the most powerful to be installed at Dagenham and is now providing clean electricity to power production of engines in the Ford Dagenham Diesel Centre.

The initial groundwork for the third windmill started in June 2011, whilst construction of the tower and blades took four days to complete. The main assembly including the 82m diameter windmill blades and hub were hoisted some 80 metres in to the air by one of the UK's largest cranes, delivered to the site by four articulated trucks, needing to be assembled itself by a 160 tonne crane.

Dale Vince, founder of Ecotricity, said: "Together with Ford, Ecotricity pioneered the use of wind to power the Dagenham Diesel Centre. We are really pleased to come back and build a third windmill so that the green energy supply keeps pace with the customer demand for Ford's most fuel-efficient diesel engines."