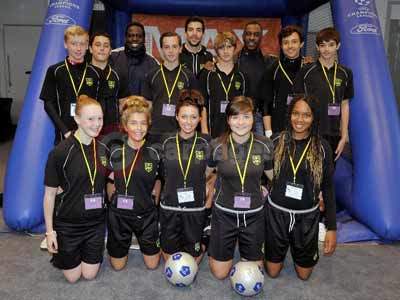 Ford's sixth consecutive year of anti-racism 'Kick It Out' campaign has been supported by sports stars and celebrities, joining around 100 young people from East London schools at the center for Engineering and Manufacturing Excellent at Ford Dagenham.

Mitra Janes, diversity and inclusion manager, Ford of Britain, said: "We are delighted to continue our support for Kick It Out. Football is diverse and inclusive and is a great platform for our involvement. Kick It Out's 'One Game, One Community' week of action uses football as a way of promoting social inclusion and encouraging young people to value diversity. Ford's relationship with Kick It Out is going from strength to strength, providing good support to neighbouring schools during Kick It Out's week of action."

Lord Herman Ouseley, Kick It Out chairman, said: "Ford has once again put on a fantastically engaging event. We are very proud to be working with Ford, and partners in the Dagenham area, on an initiative that will have a lasting impact on young people. Ford is to be congratulated for an enlightened approach to issues that impact on its local communities."

During the day, opportunities were provided to win a number of prizes including the chance for 11 students to be 'centre circle bearers' of the UEFA Champions League starball banner at the Arsenal-Olympique de Marseille game on 23rd November 2011. The prize was won by Redden Court School.