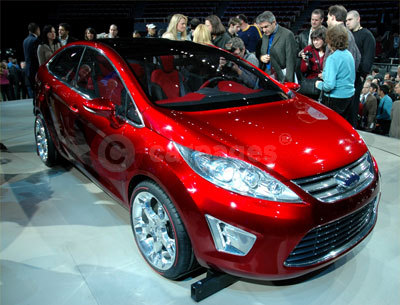 Ford's plan to return to profit in 2009 is on track, believes chairman Bill Ford. With new CEO Alan Mulally now in the job for 12 months, the major initiatives the two men put into place last year are starting to pay dividends, Ford said.

Mulally said the company was recovering from recent turmoil. Inside Ford, things feel very different to a year ago,” he said. In particular, 2008 will see six major North American product launches, and 70% of the models in US showrooms will be new cars by the end of the year.

These include the F-150 pick-up; the Flex large SUV; and Verve small car, the replacement for the Focus, shown at Detroit for the first time in four-door sedan guise. The three-door hatchback Verve, seen at Frankfurt last year, also made an appearance. Verve will be sold worldwide and is indicative of the globalised product development plan. The US-spec four-door will also form the basis of an emerging markets car for Asian markets. Meanwhile Ford will also sell hatchback Verve in the US.

Also unveiled was a new Explorer concept – different to the old SUV model, the new Ford Explorer has morphed into a crossover, with modern styling reminiscent of the Land-Rover Discovery/LR3.