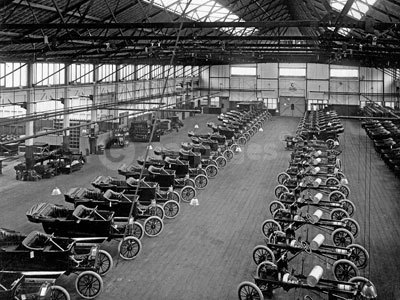 On 8th March 1911, just three years after Ford's 'Universal Car', the Model T, was unveiled in Britain, Ford Motor Company (England) Limited was incorporated to look after the most important market outside North America.

Later the same year, Trafford Park, a suburb of Manchester, played host to Ford's first UK factory with a disused tram works converted to Model T assembly opening in October. Four-man teams built individual vehicles until Henry Ford's revolutionary introduction of the moving assembly line in 1913. By 1914 Ford sales of nearly 10,000 cars were equal to the output of the next six biggest British manufacturers combined.

Ford's start in Britain had humble beginnings. In 1903 two Ford Model A cars were shipped to England and a modest trade began. The Ford Model B took to London's roads in 1905, forming part of the earliest fleet of motor taxi cabs. It was the world debut of the Model T at the 1908 Olympia Motor Exhibition that convinced Ford a British company was needed, and so began a journey that would see Ford become the UK's favourite car company.

Ford directly employs over 15,000 people in the UK, many in highly skilled roles developing and building high-technology, fuel-efficient, low CO2 engines. The Ford plants at Bridgend in South Wales and Dagenham in east London have the combined capacity to assemble two million engines annually and one in three Ford cars globally is powered by a UK engine. A further 100,000 jobs are supported through the Ford supplier chain and dealer network.

Ford of Britain chairman, Joe Greenwell, said: "Ford of Britain has been in the fabric of the nation for over a hundred years and no motor company has touched more lives in Britain. We have a proud heritage and a bright future. Ford of Britain is a major pillar of Ford's global strategy and the new Ford Focus, centrepiece of the centenary, features advanced powertrains developed and produced in the UK."

Ford plans a year-long centenary celebration with themed marketing campaigns to flag up this special year. Historical displays will take place at various motoring events and a gala event will take place in the first half of 2011.

Ford-related events are being held around the country including the National Motor Museum at Beaulieu, Hampshire and the Heritage Motor Centre at Gaydon, Warwickshire. This year's Goodwood Revival, the country's premier historic motoring event, will see a significant number of classic Ford cars take to the circuit, in September 2011.