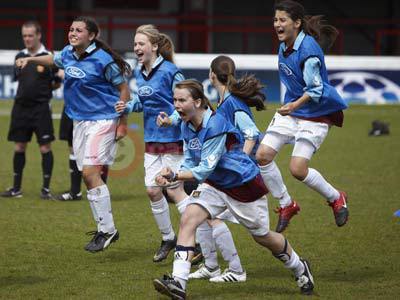 As a founding partner of the UEFA Champions League, Ford is sending the Ford Champions Youth Football Tournament Winners to this month's final.

On 7th May 2011, Ford held a five-a-side football tournament at Dagenham & Redbridge FC, which saw local teams compete to win the opportunity to be at the final.

The winning boys' team - Team Ryan FC - and West Ham under 16's - the winning girls' team - were crowned Ford Champions and will participate in the opening ceremony of the UEFA Champions League Final in front of the 90,000 crowd.

The 16 winners, aged between 14 and 16, will be on the pitch alongside Manchester United and FC Barcelona stars to display the UEFA Champions League starball banner before kick-off.

Mark Simpson, Ford of Britain marketing director, said: "After 19 years, Ford remains extremely proud to be a founding partner of the UEFA Champions League. This year, Ford is celebrating its centenary year and is delighted to be providing two youth teams from local Dagenham this amazing opportunity.

"We send our congratulations to Team Ryan FC and West Ham under 16's girls and wish them well for their important role in the opening ceremony of European football’s most prestigious match."

The UEFA Champions League final is to be held at Wembley Stadium in London on Saturday 28th may 2011.