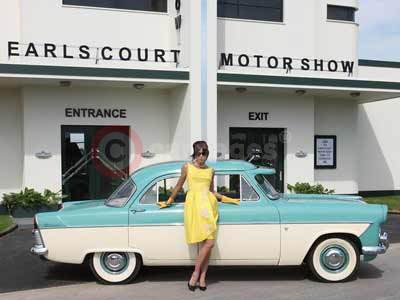 The largest ever vehicle cavalcade will take place at Goodwood, celebrating the Ford's UK centenary and signaling the end of the Ford of Britain Centenary Tour.

Ford's chief financial officer, Lewis Booth, will start the Ford of Britain Centenary Parade with Ford of Britain chairman Joe Greenwell in the lead car. The parade will include 100 Fords on the track on 11:05am on Friday, 11:10am on Saturday and 11:25am on Sunday.

The cars include the Ford Anglia 105E used in the film "Harry Potter and the Chamber of Secrets"; the 1966 Le Mans 24-hour race-winning Ford GT Mk II; the 1970 London to Mexico World Cup rally-winning Ford Escort Mk I; and the 1912 all-Ford-race winner at Brooklands: the 1911 UK-built Ford Model T - "The Golden Ford."

Two GT40 course cars will be in action between the races. The 'Earls Court Motorshow' will host a Ford exhibition with a number of vehicles, such as a 1960s Ford Corsair, a 1960s replica of Henry Ford's Quadracycle alongside a new Ford Focus and Grand C-MAX.

The Ford exhibition area will feature a Ford in Britain 100-year timeline and a 1962 Rock-ola Empress Jukebox for public use and a period-style photograph taken with the new Ford Focus.

Joe Greenwell, Ford of Britain chairman, said: "Ford is delighted to be at Goodwood Revival in such strength this year. The Ford Centenary Tour of the UK has been a great success and with an exciting range of Ford vehicles to be showcased at Goodwood, we're hoping to end our Ford of Britain Centenary celebrations with a bang!"

The Ford Centenary Tour started in August and will run until q8th September 2011 finishing at the Goodwood Revival in Chichester, West Sussex.