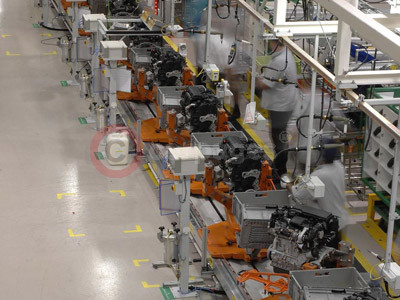 Exports from Ford's UK-based engine and parts manufacturing operations have grown by over a third in the last 12 months to keep up with increasing demand in Russia, Australia and the Far East.

Ford Dagenham's Export Distribution Centre (EDC) ships a variety of components manufactured at plants in the UK, including Ford Dagenham's engine plant and Ford Dagenham's Stamping and Tooling Operations (DSTO). The mixed volume of vehicle components transported overseas comprises approximately 30 per cent vehicle panels, 30 per cent engines and 40 per cent trim-metal used in applications such as Ford's chrome window surrounds. In addition, engines are shipped through Ford Component Sales to both Ford and non-Ford dealers in the UK.

Joe Greenwell, chairman of Ford Britain said: "Ford is investing £1.5 billion in low-carbon engineering and manufacturing in the UK over a five-year period. This benefits our customers and the 100,000 people in the UK whose jobs are directly or indirectly dependent on Ford. It also boosts Ford Dagenham's export operations, which are important to the global One Ford strategy and will help power the UK's sustainable economic recovery."

Since 2009, there has been a rising number of engines and parts shipped to South Africa, Argentina, Russia, Taiwan, North America, India, China, Japan, Brazil, The Philippines and Thailand - boosting Dagenham's production of engines and increasing the output of DSTO. In August, 2010 a single container of just 36, 2.7-litre V6 diesel engines was shipped to Melbourne, Australia - these shipments have now increased to 1,200 engines a month - while engine exports to Thailand are expected to quadruple in 2011.

The increase in exports from Dagenham has impacted positively on other areas within Ford UK including Ford's Transport Operations responsible for transporting goods, from vehicles and complete built-up engines and body panel parts, to small pop rivets for attaching components to vehicles. The heaviest items transported are packs of six engines in pallets weighing approximately 1.2 tonnes.

Paul Arrowsmith, Transport Operations manager, Ford of Britain said: "It's good news for the future of our business that the export arm of our operations is being kept so busy that we need to take on extra employees - additional packing work translates into more road movements of containers to and from various ports around Britain."