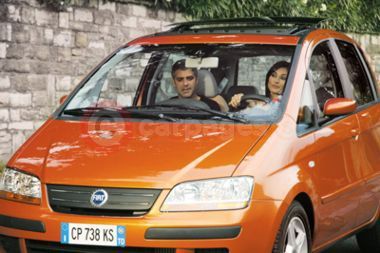 There is now a car with such generous standard equipment and attractive Italian styling that no one can resist its charm. This is the message in the TV advertisement for the new Fiat Idea, a car that goes beyond conventional distinctions between different categories of car: it is more agile than a mid-sized saloon, more spacious than a city car and more compact than an MPV. An appealing advertising campaign has been created especially for this original and elegant car.

American actor George Clooney, a household name in Italy, has been chosen as the star. In real life, he often spends time at his house at Laglio, on Lake Como, and his passion for all things Italian - from food and wine to fashion - is renowned. Obviously, this passion also extends to Italian cars, which is why the Fiat Idea, with its elegant styling, caught the attention of one of the world's most popular actors.

The advertisement consists of an intriguing story of seduction set on the roads around Lake Como. A beautiful woman is driving along the twisty roads in a flame orange Fiat Idea. She stops at a villa, gets out of the car, opens the passenger door and, unexpectedly, walks away. A robustly built man of around 40 appears, jogging. Intrigued by the open door (and by the car's beauty), the man gets into the car and we can see that he is impressed by the Idea's features to such an extent that he lies back easily, as if the car were his. Almost instantly, the woman reappears and uses the remote to lock the doors, trapping the man inside. The man starts to apologise and the woman, with a slight, triumphant smile, gets into the Fiat Idea and drives off with her prey, who is obviously George Clooney. The advertisement's closing phrase 'George not included' carries a subtle innuendo, especially for female viewers.

The making of this film required a team of seventy persons, two conventional cameras, one steady-cam and a camera-car, for shots of the car in motion. 5,000 metres of film were used in all, and considering that the ad consists of approximately thirty scenes, the phrase '…and action!' was pronounced at least five hundred times. In short, a major production effort to create this fun and original advertisement that highlights the winning features of the Fiat Idea: style and innovation, attention to detail and sophisticated design. The ad was directed by the Argentine Pucho Mentasti, who lives and works in Los Angeles, and several times winner of the Lion at the Cannes Advertising Festival. With him on the set were Agostino Castiglioni, one of the most renowned directors of photography, and, alongside the Hollywood star, beautiful model and actress Dara Tamanovich, who lives in New York.

Filming the advertisement outdoors with George Clooney was both easy and difficult. It was made easier by the actor's cooperative nature and easy-going character, which created a relaxing atmosphere on the set. The difficulties were, however, caused by the numerous fans who, in spite of barriers and Carabinieri, tried at all costs to get an autograph and a photo, requests that were almost always met by a smiling Clooney.

The advertisement, developed under the supervision of FCC (Fiat Coordination Center), will be broadcast in Italy from September 19 on the Rai and Mediaset channels, and later in other European countries. A press campaign, subdivided into four different subjects and published in dailies and automotive magazines, will start simultaneously. The press campaign also features George Clooney, captured by one of the world's leading photographers, Ferdinando Scianna.

This is a 17-year+ news article, from our Fiat archive, which dates back to the year 2000.

If in doubt check with your local Fiat dealer as car prices and technical data will have changed since 2004.

Fiat Idea Images may not be UK specification cars. Colours and exterior and/or interior elements may differ from actual models.