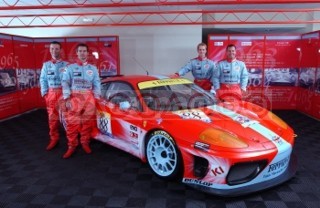 Team Maranello Concessionaires revealed the full details of its assault on the 2003 FIA GT Championship during an historic re-launch of the famous team at the newly refurbished Tower Garage in Egham, Surrey – the home of Maranello Sales Limited and the original headquarters of Ferrari UK.

Before a 200-strong audience, which included many famous team drivers from earlier eras, the team unveiled its two 360 GT race cars in their all-new ‘Cambridge Blue & Ferrari Scarlet’ livery. It also introduced its five young British drivers, its sponsors and technical partners and announced an exclusive TV agreement with Sky Sports.

"Outside of Formula 1, nothing in motor sport can demonstrate the Ferrari brand strengths so effectively as sportscar racing," commented Richard Mackay, Managing Director of Ferrari UK. "By combining the expertise of Veloqx Motorsport with the race-winning potential of the 360 GT, the proven driving talents of five young British race aces, and the backing of Ferrari UK, we are confident that TMC is going to be a great team to carry the Maranello name and colours in this exciting 10-race, pan-European Championship."

Veloqx Motorsport and Ferrari UK believe that the FIA GT Championship is the world’s most competitive sportscar series and will provide an excellent showcase to raise the profile of Maranello Concessionaires across Europe and around the world. The company, which operates the marque’s only official world-wide ‘classic parts service’ for Ferrari road cars, also has Ferrari operations (via parent company Inchcape plc) in Belgium and many Middle East countries.