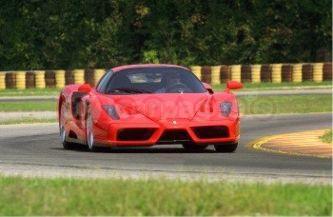 The day after clinching its fourth consecutive Formula 1 Constructor's World Championship crown, Italy's charismatic sportscar maker Ferrari, announced its fastest-ever road car. The new 220 mph two-seater, which arrives in the UK later this year, embodies the spirit, the looks and much of the technology developed by Ferrari for its Formula 1 cars.

In celebration of its continuing domination of Formula 1 and in memory of the company founder, the new model is called the Enzo Ferrari. It is the ultimate modern day embodiment of the marque's passion for performance, technology and dramatic style.

"Formula 1 has never offered our company such a genuine laboratory for advanced research as it has in recent years," comments Ferrari President, Luca di Montezemolo. "To combine our success on the track with the fundamental role of race car technology, I decided that this new car, as the pinnacle of our technological achievement, should be dedicated to our founder, who always felt that racing cars should lay the foundations of road car designs. So this model, of which we are all very proud, will be known as the Enzo Ferrari."

The very first Ferrari, built in 1947, was a 12-cylinder racing car and from those early days, the racetrack has always been the testing ground for advanced technological research that has later gone into Ferrari road cars. More than any previous Ferrari, the new Enzo epitomises that philosophy by incorporating the very latest advances from Formula 1, in the chassis, engine and integrated electronic systems, which enable the driver to enjoy the car's extreme performance in complete safety.

Styling The Body, Designing The Chassis

Never before has the styling of a Ferrari by Pininfarina been so directly derived from its function. The nose section of the Enzo is heavily influenced by Formula 1 and the entire body is shaped to ensure optimum airflow for cooling the engine and brakes, while generating unprecedented levels of grip-enhancing downforce with minimal aerodynamic drag.

The under-car ground effects are so efficient that the large rear wing required by many supercars is not needed. The aerodynamic balance of the car is maintained at speed by automatic adjustments to the position of twin front flaps and a single rear spoiler.

The chassis is made entirely from carbon fibre and aluminium honeycomb sandwich panels. It is immensely rigid - for excellent handling, immensely strong - for maximum crash protection, and light, weighing just 202 lb (92 kg). The body panels clothing this strong chassis are also made using advanced composite materials. The doors hinge upwards and forwards, assisted by gas struts, to allow easy access to the cabin. The Enzo passes all current and many future crash safety standards.

The Enzo is powered by a new, ultra-light, 6.0-litre V12 engine, which has a number of unique technical features. The performance goals for the engine were very high power - 110 bhp per litre - with generous torque from low revs and a driveable nature. More than 383 lb ft of torque is generated at 3,000 rpm and variable inlet and exhaust valves, together with electronic management for each row of cylinders and a drive-by-wire throttle, ensures that the engine is extremely responsive.

Like an F1 car, the gearbox in the Enzo is coupled directly to the rear of the engine by a casting that doubles as the engine oil tank. The six-speed gearbox adopts triple cone synchronisers on all ratios to ensure smooth changes, which are entrusted entirely to an electrohydraulic system activated by the driver using paddles behind the steering wheel. A fully automatic option is not offered.

The driver can choose from two gearchange modes. 'Sport' is intended for everyday driving and gives a more comfortable gear change strategy. 'Race' can be activated for more extreme sporty situations and in this mode a third choice, known as 'Super' is offered. This last mode cuts gear change times by 50 per cent to a mere 150 milliseconds. The modes selected also govern the point at which the ASR traction control system is activated. It is also possible to switch the ASR off.

The Enzo is the world's first car with complete electronic integration of the control systems for engine, gearbox, suspension, anti-lock brakes, traction control and aerodynamics. The six subsystems all interact with each other comparing relevant information to enhance the overall performance of the car.

With the car in motion, the systems (developed in collaboration with Ferrari Gestione Sportiva), continuously share data and react differently depending on the mode selected and the activity being undertaken. For example, during gearchanging, the gearbox subsystem takes priority over others, managing the clutch, engine and suspension settings to give the fastest, smoothest gearchange while preventing the car from pitching.

Riding And Following The Road

Fully independent suspension using double wishbones front and rear, with antidive-antisquat geometries to limit pitching during braking and acceleration is fitted to the Enzo. The four coil spring-damper units are mounted horizontally on the chassis and operated by push-rod links to the wishbones - like an F1 car. A specially developed system monitors vehicle speed, attitude and load via seven accelerometers and continuously adjusts each damper's setting to give the Enzo the best possible ride & handling characteristics. Like the brakes, the steering is power-assisted - with a steering rack that's 10 per cent quicker than the 360 Modena's.

The innovative braking system on the Enzo is a world 'first'. Never before has a road car employed carbon-ceramic brake discs, although they are widely used in Formula 1. They offer enormous stopping power and significant weight reductions - 12.5 kg less than conventional steel units. Designed and manufactured by Brembo to a Ferrari specification, the 380 mm diameter, 34 mm thick discs have been engineered to last for the lifetime of the car.

Like Ferrari's Formula 1 cars, the Enzo rides on specifically developed ultra-low profile Bridgestone tyres that are unique to this model. All four single-bolt light aluminium alloy wheels measure 19 inches in diameter. The front wheels are nine inches wide, shod with 245/35 tyres, while the rear are 13 inches broad with 345/35 tyres. Each wheel is equipped with a sensor, which alerts the driver to any tyre pressure loss.

Driven by a desire to optimise the flow of information and the way controls were activated by the driver, the Enzo's interior designers found themselves drawn towards adopting more F1-style solutions.

The new three-spoke, 350 mm diameter steering wheel has a flat-top complete with a row of LEDs indicating engine revs and three controls each side of the air-bag linked to the main car control functions. Grouping essential controls around the steering wheel grip leaves more room for the twin paddles behind the wheel, which operate the electronic gear selection. The view through the wheel is dominated by a central rev-counter, flanked by the 400 km/h (250 mph) speedometer and a graphic screen on which a variety of displays can be called up.

Buyers of the Enzo will be invited to the Ferrari factory to have the cockpit of their car tailored to their specific needs. There will be a choice of four width fittings for both the cushion and backrest of the leather trimmed multi-adjustable Sparco seats. The position of the accelerator and brake pedals can be adjusted fore and aft - and sideways to accommodate drivers who prefer to use left-foot braking.

In keeping with the Ferrari tradition for its 'extreme sports cars' - cars like the GTO, F40 and F50, which drew together the marque's technical expertise and racing experience - the Enzo will be a limited edition series.

Just 349 examples of the Enzo will be produced, all of them left-hand drive. It is expected that between 25 and 30 Enzos will be available for Ferrari UK to offer on the British market, at a price of no less than £425,000. Confirmed UK prices will be announced soon. The Enzo will make its UK-debut at Birmingham's NEC on 24 October, the opening day of the British International Motor Show.

This is a 19-year+ news article, from our Ferrari archive, which dates back to the year 2000.

If in doubt check with your local Ferrari dealer as car prices and technical data will have changed since 2002.