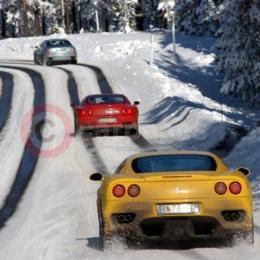 Ferrari 575M
Moscow 19 March 2004 – After a spirited dash across Northern Europe, Sweden, Finland and Saint Petersburg in Russia, a Ferrari 575M Maranello, a 360 Modena, a Maserati Quattroporte and a Spyder Cambiocorsa have arrived in Moscow. They attended a press conference organised by importer Mercury, as a huge crowd of Muscovites gathered for the official launch of Ferrari and Maserati in the Russian market.

There are high expectations for the two brands in Russia, not least because this Tour offered further confirmation of just how reliable the two brands are when faced with the toughest of climatic conditions.

"The official marketing will begin with the opening of the Showroom in Moscow in the second half of May," announced Maserati Sales Director Roberto Ronchi. "But even now, we can predict selling at least 100 Ferraris and Maseratis in 2004 alone."

"The Russian market has enormous potential," said Ferrari Maserati Group Communication Director Antonio Ghini, "but as is traditional, Ferrari and Maserati both want to maintain the requisite brand exclusivity and respond to spontaneous market demand without forcing it, as that wouldn’t be part of the Group’s policy."

The Russian and Northern European Tour left the Maserati headquarters in Modena on 5 March and cut through Germany, Denmark, Sweden, Finland and Russia as far as Saint Petersburg and Moscow, before setting off on the return leg through the Baltic Republics, Poland, the Czech Republic and Austria. The cars are expected back in Modena in late March.

Great attention was also focused on Formula 1, in view of the upcoming second leg of the F1 World Championship which takes place in Malaysia this weekend.

Russia will be the 50th country conquered by the Ferrari Maserati Group as a result of very high demand and strong market interest.

Holder of the Constructors’ World title for the last five Formula 1 seasons, Ferrari’s most important world markets are the United States, Germany and England. The market situation is quite similar for Maserati which also looks set to garner fresh victories on the racing circuits courtesy of the new MC12 after it makes its track debut in mid-season.

This is a 17-year+ news article, from our Ferrari archive, which dates back to the year 2000.

If in doubt check with your local Ferrari dealer as car prices and technical data will have changed since 2004.