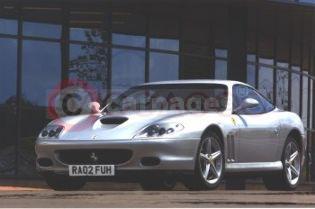 It represents a further leap forward in the development of the 550 Maranello, a car generally considered to be one of the marque's most popular models ever.

As with all Ferraris, the heart of the new car is the engine. In this case, the 575 is the abbreviation of its effective displacement, which has been increased to around 5,750 cc.

The 'M' Maranello not only links the new model to its predecessor, the 550 Maranello, it also stands for 'modificata' (Italian for modified), meaning that all-round performance has been improved, particularly by the introduction of the company's legendary Ferrari F1 gearchange in a road-going Ferrari V12 for the first time.

The styling of the 575M Maranello was entrusted to Ferrari's long-time creative partner Pininfarina. The balanced lines and sober design that made the 550 Maranello an "instant classic" when it first appeared, have been left largely untouched.

The modifications made to the original forms are subtle and are designed to meet specific technical requirements. The shape and size of the front air intakes, for instance, have been optimised to increase the flow of cooling air to the more powerful engine and there's a new, full-width front spoiler design which improves downforce.

The new front section of the car incorporates redesigned headlights, with body-colour surrounds and grey detailing, featuring xenon technology bulbs for dipped beam, as standard. The wheels now also have a much sportier look more in line with the new car's racier temperament.

The 575M Maranello's 12-cylinder engine retains many of the most prestigious elements of this configuration. They include the 65 degree V12, four overhead camshafts, four valves per cylinder layout, along with the crank case, cylinder heads and sump all in light alloy and a dry sump lubrication system.

The 575M Maranello's new V12 engine was designed to increase both power and torque right across the rev range, for even sportier power delivery, quicker response times in all conditions and improved driving pleasure. The result was an increase in maximum power to 515 bhp (379 kW) at 7,250 rpm, and in maximum torque to 589 Nm at 5,250 rpm (435 lb ft).

Overall, torque is up on average 1.5 kgm (11 lb ft) between 1,000 and 4,000 rpm compared to the 550 Maranello. This improved power delivery comes courtesy of the wide range of modifications made to the V12. These include:

The new car boasts a perfect weight distribution of 50 per cent over both front and rear axles with the driver on board. This occurs as a result of the rear Transaxle layout, with the gearbox in unit with the limited-slip differential and situated in the same casing as the bevel-type final drive.

This is a six-speed gearbox with new multi-cone synchronisers. In fact, synchronisation has been completely reviewed and improved to guarantee quicker gearshifts during more assertive driving.

In addition to manual shifting, the new 575M Maranello's transmission also has the F1 gearchange, developed directly from the marque's experience on the Formula 1 tracks.

The F1 gearchange is an electro-hydraulic system controlled by two paddles on the steering wheel instead of the traditional gear stick and clutch pedal. The F1 system offers the following improvements over the traditional system:

The F1 gearchange is about much more than just improved performance, however. It is also part of an integrated driver control strategy on the car.

The F1 transmission works in conjunction with the adaptive damping management and traction control, giving the driver the opportunity to select different performance parameters, for either a sportier or more comfortable ride, at the touch of a button.

The driver has two main manual shift modes - Sport or ComfortRegular - to choose from, using a button on the console, and these are both integrated with similar corresponding suspension damping management and electronic traction control settings.

The use of the F1-style gearchange in the 575M Maranello means faster shift times during more high performance driving (for example, up and down over 6,000 rpm). As a result, the F1 transmission also delivers better acceleration than the manual. In order to optimise acceleration when moving off quickly from a standstill, the 575M Maranello's F1 gearchange has also been given a "launch control" mode.

One major improvement in the 575M Maranello's handling has been accomplished by introducing the new high performance adaptive damping system, based on four proportioning valve shock absorbers and six sensors which independently read body and suspension movements and instantly relay the information to the CPU.

Thanks to the speedy response of the Mannesmann proportioning valve shock absorbers (80 ms compared to 180 ms for traditional shocks), the system can "read" the type of road surface the car is travelling over (uneven, smooth, dirt) and instantly adapt the suspension for improved in-car comfort.

The driver has two automatic modes to choose from:

The already excellent braking system of the 550 Maranello has been further upgraded to meet the 575M Maranello's higher performance levels as well as to improve their general functioning.

To achieve this, the following modifications were carried out:

The 575M Maranello now boasts the new 5.3 version of the 550 Maranello's 5.0 ABS/ASR system, while Ferrari's two traction control modes (Normal and Sport) have been retained.

With regard to the wheels and tyres, weight reduction on the front wheels amounts to 1.8 kg (4 lb) and 1.2 kg (2.6 lb) on the rear. In addition, a special 19-inch tyre (255/35 front and 305/30 rear) has been developed to fit the special-order split rims which offers more extreme handling characteristics, especially lateral and longitudinal grip, without sacrificing too much of the 575M Maranello's ride comfort.

The 575M Maranello also boasts a sensor that enables the driver to check tyre pressures in normal day-to-day driving, courtesy of a dial on the console.

The 575M Maranello's chassis, body and interior details were all completely redesigned to ensure that they were compliant with the most up-to-date safety norms.

Particular attention was paid to protecting passengers from side impacts. The 575M Maranello has a particularly effective chassis and body structure when it comes to side impact protection (high resistance materials, thicker section sills, door structure optimised to absorb side impacts). In addition to this, however, the interface structure and components between the doors and sides have been further optimised, especially the locks and hinges.

The 575M Maranello's bucket seats also offer protection against side penetration and help contain the occupants' movements in the event of an impact. The style and construction of the door panels mean that stresses are spread in impact situations. They also provide impact absorption areas to further improve occupant safety.

Passive safety features that have been designed to work with these design solutions include two front airbags, seat belt pre-tensioners and a safety inertia switch, which is designed to cut off the fuel supply in the event of a collision.

These features, which link in with the car's basic structure and specific construction choices, mean that occupant protection levels are extremely high and meet Ferrari's design objectives, both in terms of head-on collisions and side impacts.

While still remaining faithful to the original 550 Maranello concept of in-car comfort and quality of life on board, the interior of the 575M Maranello has been completely redesigned to give it a more sporting, functional ambience.

The main dials are now contained in one single group in the driver's direct line of sight with the large metal-ringed rev counter taking pride of place in the centre. The console directly in front of the driver hosts the ancillary indicators, including the clock and tyre pressure gauge.

The steering wheel is now slimmer and stripped down to its metal structure, while the horn buttons and F1 gearchange paddles are all in brushed aluminium.

The dashboard is more compact, but the new seats feature six-way power adjustment with memory on the driver's side and co-ordinate with the completely redesigned door panels, to create an area that harmonises perfectly with the rest of the interior.

Other more subtle functional details have also been redesigned and updated. The fuel tank cap and boot poppers have been moved to a new position, functional new rubber inserts have been added on the rear luggage compartment for improved luggage grip and new seat belt fasteners spread the load surface.

In keeping with Ferrari practice, the 575M Maranello can be personalised to taste. Thanks to the wide range of options available from the Carrozzeria Scaglietti programme, owners can now extensively modify the style, kit and functionality of their car to suit their own preferences.

They can also enhance the 575M Maranello's racing spirit with track-oriented options, such as new carbon racing bucket seats, the Fiorano handling package and the use of carbon fibre details in the interior.

The flexibility of the Carrozzeria Scaglietti programme means that Ferrari can now create customised colours from a sample supplied by the client. Every last upholstery detail in the cabin can also be dyed to suit individual requirements using a line-drawing of the interior as a guide. Personalised stitching, featuring contrasting colours, different thicknesses and stitch sizes, is also possible.

This is a 19-year+ news article, from our Ferrari archive, which dates back to the year 2000.

If in doubt check with your local Ferrari dealer as car prices and technical data will have changed since 2002.

Ferrari 575 Images may not be UK specification cars. Colours and exterior and/or interior elements may differ from actual models.