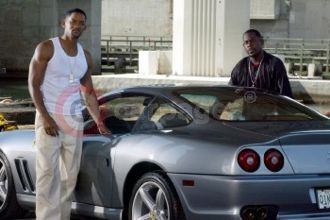 When the exhilarating, high-intensity action adventure feature film ‘Bad Boys II’ hits the cinema screens all over the UK on 2 October, leading stars and supreme good guys Martin Lawrence and Will Smith will share the glory and a Ferrari 575 M as the ultimate cop-car.

Eight years after Bad Boys became Columbia Pictures’ highest earning and most profitable film of 1995, the team of producer Jerry Bruckheimer and director Michael Bay reunited with Lawrence and Smith, to create Bad Boys II. This time the good guys (alias Bad Boys Lawrence and Smith) have to be badder than ever to outwit narcotics empire-builder Tapia (Jordi Molla) and rescue the beautiful Syd (Gabrielle Union), an undercover DEA agent who gets caught up in the crossfire.

Searching for locations, director Bay became intrigued by Miami’s MacArthur Causeway which links the city to the Miami Beach peninsula. Somehow Bruckheimer persuaded local authorities to close all the east-bound lanes of the Causeway and re-route regular traffic for four days of filming and the result is one of the most intricate, high-velocity, thrill-packed car chases in movie history.

Bad Boys Lawrence and Smith have to fling their smoke grey Ferrari 575 M Maranello through scenes of utter chaos as a giant car carrier sheds its load at 70 mph, and a succession of vehicles flip, spin, roll and smash onto the highway – creating a series of mobile chicanes through which the Ferrari ultimately emerges unscathed, but only after the audience’s pulse rates have at least tripled. There are several car chases in Bad Boys II, but this is the one film-goers will remember!

The Ferrari 575 M has such a strong road presence, and combines supercar performance with genuine everyday practicality, that it was chosen by Bay and Bruckheimer as the ideal car for their Bad Boys, a believable – if extreme – cop-car with attitude.

"Everything had to be way over the top," says stunt coordinator Andy Gill. "We got really low, shaky, fast angles, right up to the many moments of impact, so that the audience experiences the punch of every turn and every car hitting – as though they are actually in the Ferrari with Martin and Will, dodging the mayhem. Every shot was a big shot and the action is so detailed, so intense that just one page of the script took four days to shoot."

Renowned stuntman Henry Kingi and his stunt team brought in an additional 25 drivers for this four-day Causeway shoot and assembled a fleet of 60 cars, including 15 that were destined to be thrown off the carrier and wrecked as other cars smash into them and deflect them into the path of the heroes’ Ferrari.

Two purpose-built camera vehicles were manufactured for Bad Boys II. A 100 mph go-kart complete with 35mm camera platform and a fortified, customised pick-up (named ‘Bay Rammer’ by the crew) with three external camera mountings protected by steel cages and tasked with ramming its way through cars as they toppled from the carrier.

Ferrari 575 Images may not be UK specification cars. Colours and exterior and/or interior elements may differ from actual models.