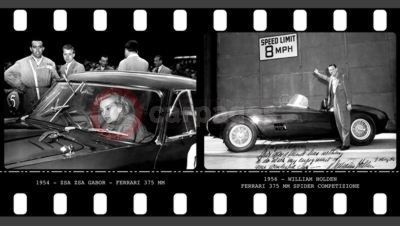 Maranello (Italy), February 16th 2007 - The movies are back in the spotlight once again at the Galleria Ferrari in Maranello with the opening of the second exhibition devoted to the actors and films that have contributed to enhancing the Ferrari legend worldwide.

As part of the Company’s 60th Anniversary celebrations, this latest exhibition includes a selection of over 40 previously unseen photographs taken from the Ferrari Archive and featuring international film stars who fell under the spell of the Prancing Horse either on set or in their private lives. Stars immortalised at the wheels of their Ferraris, during visits to the Ferrari factory or on the sets of their films are now seen for the first time in public in a special exhibition with all the magic of the silver screen.

Clips from over 70 different films have been edited together too to tell the story of Ferrari’s output over the last 60 years through cameos from its most glittering car stars.

The Ferrari legend has inspired both Cinecittà and Hollywood since the company’s foundation and Prancing Horse cars have starred in some unforgettable scenes, sharing the screen with the likes of Ava Gardner and Gregory Peck in the black and white films of the 1950s and Sophia Loren and Marcello Mastroianni in the classic movies of the 60s. They’ve also featured in the films of Alain Delon and Walter Matthau, the cult series of the 1970s, and, of course, some of the most lavish Hollywood blockbusters of today.

The exhibition also includes a selection of posters, advertisements and stills from movies old and new as well, of course, as some of the stunning cars themselves, including the 250 GT California, which appeared in Vittorio De Sica’s unforgettable Yesterday, Today and Tomorrow and Roger Vadim’s Dangerous Liaisons.

A taste of what the exhibition has to offer will also be on show at the Ferrari Stores in Milan and Rome, from April 17th to May 7th and from May 9th to May 30th respectively.

The exhibition runs until June 30th and is included in the price of the admission ticket to the Galleria which is open every day from 9.30 to 18.00 (and until 19.00 on May 1st).