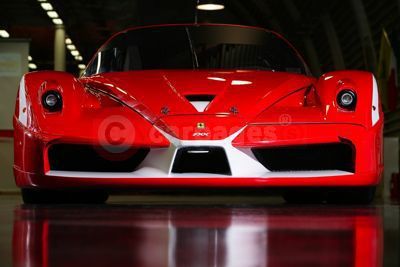 The innovative FXX programme, based on the eponymous prototype car and launched by Ferrari in June 2005, is being extended to 2008/2009. The FXX, which is the most advanced GT ever created at Maranello, has been updated with an evolution package aimed at further improving its handling and performance. The package was developed as a result of Ferrari’s collaboration with its Client Test Drivers and with the invaluable support of Michael Schumacher. The FXXs equipped with this package will also sport a new livery in addition to new rear wing profiles.

The FXX is not homologated for road use and there are no plans to compete with it either. In fact, the FXX prototype is designed exclusively for track driving as part of a specific R&D programme agreed with a selected group of just over 20 clients involving 14 group test sessions and 14 private ones in the last two years.

Thanks to readings taken over the 16,500 kilometres of tests carried out in 2006 and the 18,500 kilometres covered in 2007, the modifications made to the car have focused on honing its aerodynamics, running gear and electronics. Seven-times Formula 1 World Champion Michael Schumacher also joined the ranks of the client test drivers and gave the programme the benefit of his vast experience on several occasions.

Maranello’s engineers studied the wealth of information gained to develop a kit which will cut the FXX’s Fiorano lap time to under 1’16’’ (previously it was 1’18’’).

The car’s new traction control system, developed in close collaboration with the GES Racing Division engineers, gives the driver a choice of no less than nine different settings (plus the off position) which are selected using a switch on the central tunnel. This means that the driver really can modify the car’s behaviour on the track from corner to corner, just as the Formula 1 drivers do to maximise performance and reduce tyre wear. The FXX’s traction control is also now less invasive and more flexible, adapting more efficiently to the individual driving style of each driver – a requirement pinpointed when this very extreme car was being driven on the track by non-professional drivers.

The FXX’s special 19” Bridgestone tyres now last longer too thanks to a new car setup and new front suspension geometry, while the Brembo brakes, which boast large Composite Ceramic Material (CCM) discs, are more efficient with the result that the brake pads last twice as long.

Thanks to the drivers’ feedback the Ferrari engineers have also developed new aerodynamic solutions aimed at increasing downforce over the rear axle. The FXX now sports a new rear diffuser, nolder and rear flaps which have combined to increase aerodynamic efficiency by 25% overall. The active front spoiler control system settings have been adjusted to take these modifications into account too.

New telemetry monitoring of the steering angle and brake pump pressure will further boost the interaction between Client test drivers and the company’s engineers also.

From next year onwards, it will be possible for drivers to have two extra video cameras mounted on their car in addition the existing rear-facing one. This will, of course, give the drivers excellent rear visibility without having to impinge in any way on the car’s aerodynamics.

The FXX evolution package includes participation in a series of track events that Ferrari is organising at international circuits for 2008/2009. Six events are planned for each year (two in North America, two in Europe and two in Asia). In addition to these, the FXXs will also be participating, as per tradition, in the prestigious end-of-season Ferrari World Finals.

As happened in 2006/2007, the cars will be backed up at each event by a 15-member official team made up of engineers, electronics experts and mechanics capable of providing complete assistance to clients. Needless to say, the latter will still be able to organise their own private individual track sessions in their car as well.