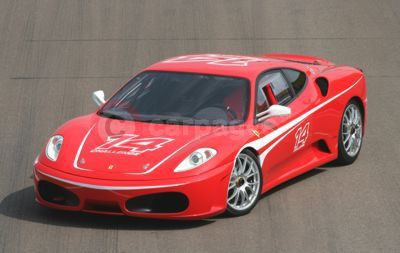 The Ferrari F430 Challenge will make its UK debut today at Autosport International in Birmingham. The new racing car is derived from the 8-cylinder road-going berlinetta and will take part in the Ferrari Challenge Trofeo Pirelli one-make championship in 2006. Over 100 F430 Challenge race cars will hit the tracks this year in the three groups of the series in the USA, Italy, and Europe.

Ferrari has also reaffirmed the strong link between its GT and sporting divisions with the new F430 Challenge which is specifically designed to meet the expectations of its sportier clients. The F430 Challenge retains the same general look and 490 hp engine as the road-going version. However, it also incorporates a large number of significant track-oriented modifications and new features not seen in the 360 Modena Challenge, which it joins on the track this season and completely replaces in 2007.

As ever, the transfer from Formula 1 is significant, particularly with regard to the braking system which uses carbon ceramic material (CCM) - a first for a Ferrari sports competition car. The electronic gearbox is also F1-derived and works in exactly the same way as the one used on the grand prix car. Fifth and sixth gear ratios have also been modified with respect to the road-going version, as has the final drive ratio, in order to make the most of the engine on all the circuits where the F430 Challenge will race. The new 19’’ slick tyres were specially developed by Pirelli to meet the extremely strict regulations that require the tyres to cope with long distances delivering extremely high performance.

The F430 Challenge boasts a kerb weight of just 1225 kg (excluding fuel). Weight has been reduced in every area of the car: of particular note are the Lexan windscreen, the all-carbon fibre intake plenum cover, and specific exhaust system. Another important feature introduced in the F430 Challenge is the new steering wheel which has a quick release mechanism to provide easier access for drivers. The steering wheel also has buttons for communication with the pits, to set the pit lane speed and to interface with the new colour digital instrument panel. The rear of the car is characterised by the specific exhaust system which has high central tail pipes, and by the modified grille which increases the extraction of hot air from the rear of the engine bay. The anti-roll bars, springs and single-rate shocks have also been modified for racing use. The F430 Challenge also features new centre-locking wheels and pneumatic air jacks for faster wheel changes in the pit lane.

The F430 Challenge will be seen for the first time in the UK on the Sabelt stand, a new sponsor of the series, at Autosport International, the UK Racing Car Show at the NEC in Birmingham.

2006 will mark the 14th consecutive year of the Ferrari Challenge Trofeo Pirelli. This series is more than one of the most respected and professional Gentleman’s Racing Series. It is the embodiment of the Ferrari lifestyle combining exclusive ambience with thrilling competition.

The main innovation for the 2006 Ferrari Challenge Trofeo Pirelli season centres on the debut of the F430 Challenge which will race alongside the 360 Modena Challenge (with separate races or classes), prior to taking over as the only car for the series in 2007. The new car has even more of a GT philosophy than its predecessor, in terms of its equipment and above all its performance.

The endurance formula for the Challenge races continues. It was successfully introduced last year, featuring a mandatory pit-stop, lasting a set time, thus allowing for the participation of cars driven by a single driver or a crew of two.

The series offers F430 Challenge and 360 Modena Challenge owners the opportunity to use their race cars as they were intended. At certain venues classic models compete in a separate series which also may include historic and legendary Formula 1 cars. As a special highlight, the new Ferrari FXX may also be seen going through its paces at select Challenge events this year.

In 2006 the Ferrari Challenge Trofeo Pirelli racing series celebrates its 14th consecutive season in Europe with six events scheduled throughout the year and a final event hosted in Italy. The final in October hosts participants from all over the world and wraps up the season with two days of competition in a festival of speed and performance. This year’s European calendar will kick-off with the first race at Silverstone. The race schedule is as follows:

Ferrari F430 Images may not be UK specification cars. Colours and exterior and/or interior elements may differ from actual models.