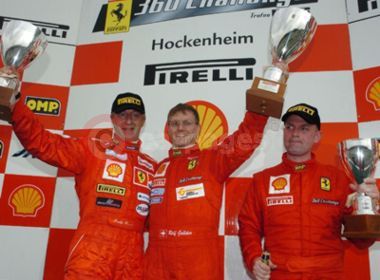 The Ferrari UK 360 Challenge team stepped up to the podium in the first race of the new Ferrari Challenge Pirelli Trophy season as Peter Sowerby drove car 76 to third in the Shell Cup at Hockenheim. The two-car team also featured Christopher Catt in car 57 and between them the Ferrari UK team scored 31 points in the championship.

Philipp Baron (Austria) came out on top in the opening round of the season in the European series of the Ferrari Challenge Pirelli Trophy, held at the Hockenheim circuit in Germany. Victory in the Shell Cup, reserved for gentlemen drivers, went to Rolf Galliker (Switzerland). The German event also featured a demonstration run by eleven single-seaters prepared by the Maranello F1 Clienti department, with a noteworthy appearance of a 1972 312/B3 S.

In the Pirelli Trophy, Michael Cullen (Ireland) finished second, crossing the line ahead of Paddy Shovlin (Ireland). In the Shell Cup, the runner-up spot went to Freddy Kremer (Germany), ahead of Peter Sowerby (Great Britain).

The Ferrari F1 demonstration at Hockenheim featured four cars driven by Michael Schumacher from 1999 to 2002 and two ex-Barrichello machines (F2001 and F2003-GA). Also on track was an F1 312 T, driven by Clay Regazzoni in the 1975 season.

Philipp Baron (Austria) also won race 2 of the opening round of this season’s European Ferrari Challenge Pirelli Trophy at the German circuit of Hockenheim. Freddy Kremer (Germany) came out on top in the Shell Cup for gentlemen drivers. The next round of the European Championship takes place in England at the Silverstone circuit, over the 14th and 15th May, while next weekend, Misano Adriatico is the backdrop for the Italian series of this one-make championship for 360 Modena Challenge cars.

In the Pirelli Trophy, second place in Race 2 went to Ange Barde (France), who crossed the line ahead of Paddy Shovlin (Ireland). As for the Shell Cup, the runner-up spot went to Rolf Galliker (Swiss), ahead of Ralf Schaefer (Germany).

This year’s Ferrari Challenge races run to an endurance type formula with each race lasting 50 minutes, including a compulsory pit stop which lasts for a set minimum time. This allows for cars to be driven by a single driver or a crew of two.

The TV magazine programme, ‘Ferrari Racing’, broadcasting on the new Eurosport 2 satellite channel and the free to view SportItalia, will be providing ample coverage of the European Ferrari Challenge Pirelli Trophy, as from the month of June, as well as other activities run by Ferrari Corse Clienti.